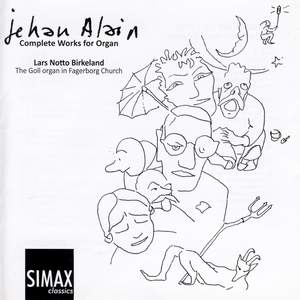 Birkeland's survey is more comprehensive than most and includes several rarely-heard little pieces. But he opens with the best-known of all his works, Litanies, in a disciplined performance that... — BBC Music Magazine, June 2011, 4 out of 5 stars More…

February 3rd 2011 is the 100th anniversary of the birth of French composer Jehan Alain. This 2-CD set features his complete works for organ performed by Lars Notto Birkeland on the new Goll organ at Fagerborg church in Oslo. Jehan Alain's father was also an organist, and a pupil of Guilmant and Vierne. Jehan himself studied with among others Dukas and Dupré at the conservatoire in Paris. He left behind more than 140 compositions as well as a multitude of drawings and texts. Tragically, he joined the French army during the Second World War, and died in action in 1940 only 29 years old. Most of Alain's music, with the notable exception of some of his organ music like the “Litanies” and “Trois Danses”, has remained relatively unknown, and the published editions contain many inaccuracies. As a result of this, when preparing this recording organist Lars Notto Birkeland has studied in detail the different manuscripts that exist of each work. Alain himself only saw the publication of five of his works during his lifetime.

Lars Notto Birkeland gave his debut organ recital at Oslo Cathedral in 1998 and has since pursued an active career, including performing Poulenc's Organ Concerto and Saint-Saëns's ‘Organ’ Symphony with the touring Oslo Philharmonic. He has given recitals at many festivals including the Bergen International Festival and Oslo International Church Music Festival. Birkeland received a government grant for artists for 2006-2008 in order to work on the music of Jehan Alain.

Birkeland's survey is more comprehensive than most and includes several rarely-heard little pieces. But he opens with the best-known of all his works, Litanies, in a disciplined performance that shows him to be an elegant player with secure technique...Even though a more snarling French instrument might be desirable, the organ in Oslo's Fagerborg Church has a crispness that suits this music well.