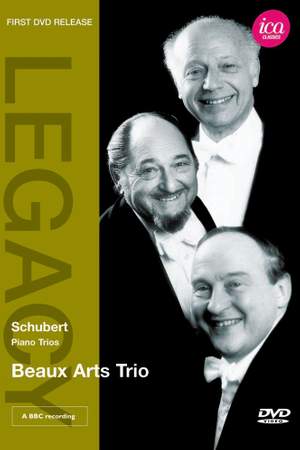 The filming of the B flat Trio was one of the Beaux Arts Trio’s last activities with Bernard Greenhouse who retired shortly afterwards. Both performances here are deeply expressive, with unexpected shadows in the sunny B flat Trio, revealing hidden depths to Schubert’s work.

“I haven’t heard such playing since Cortot, Thibaud and Casals” – the distinguished French conductor, Charles Munch, on the original Trio following their first concert.

Both concerts are beautifully filmed in Edinburgh’s elegant Signet Library.