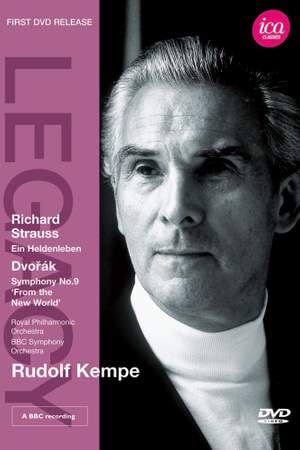 Fascinating mid-'70s footage of Kempe at the Proms, caught in vintage colour. Famous for his Heldenleben, he is even more illuminating in Dvorak's New World Symphony. — BBC Music Magazine, July 2011, 5 out of 5 stars More…

The audio recording of the Dvorˇák 9 from this Kempe DVD has been released on BBC Legends, and was a Penguin Guide Rosette Winner. In this performance of Strauss, we witness Kempe’s mastery in securing issues of ‘structure, atmosphere and emotional intensity’ (David Patmore), along with his ‘unfailing musicality’. According to the Times critic, Joan Chissell, Kempe’s performance of Heldenleben won him a ‘hero’s ovation, and rightly… Conducting without a score, Mr. Kempe gave detailed guidance to every player, yet at the same time retained the ability to stand back and view the work in perspective.’

The performance of Dvorˇák 9 a year later was described by Chissell as ‘glowing enough to make you fall in love with its familiar strains all over again’.

‘Kempe successfully avoided what seems increasingly to be a danger today: exaggeration for the sake of effect on the one hand, and stiffness as a result of seeking clinical perfection on the other. Only a chosen few, such as Kempe, can realise their intensions by re-creating and at the same time remaining true to the original’ (Dietrich Fischer-Dieskau)

Kempe’s style appealed greatly to British musicians in whom he inspired great confidence and joy.

Fascinating mid-'70s footage of Kempe at the Proms, caught in vintage colour. Famous for his Heldenleben, he is even more illuminating in Dvorak's New World Symphony.

a bittersweet reminder of times when a spot could be held for 16 or even 32 bars without breaking off to see is something more diverting is happening elsewhere...the more intense love for this music comes flowing out of [Kempe's] arms, and the BBC SO wind principals respond in kind...The battle is as exciting as his studio recordings, but there's much more light than heat about direction and playing