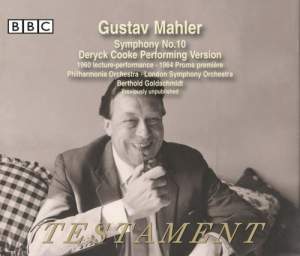 it is fascinating to hear how Goldschmidt's initially tentative grasp of this music had strengthened by the 1964 Prom. Fascinating too, to compare that version with the further refinements and... — BBC Music Magazine, April 2011, More…

Mvmt 4. Opening of scherzo and trio

Mvmt 4. Restatement of scherzo and trio

In the course of preparing the booklet for the BBC’s celebrations of Mahler’s centenary in 1960 Deryck Cooke felt that he needed to do more than simply describe the unfinished state of the Tenth Symphony. Most of Mahler’s sketches had been published in facsimile in 1924, and as he transcribed what he called a ‘chaotic manuscript’, Cooke discovered to his surprise that detailed study of the sketches revealed much more than the incomplete and fragmentary work he had believed it to be. The more or less complete first and third movements had, of course, already been edited and performed, but the other three movements, Cooke realised, were part of a fully worked out and coherent musical argument, without a missing bar. Much was sketched hastily, and would have been subject to very substantial revision; but the power of this unfinished music and its significance in Mahler’s output were such that he felt that it had to be heard.

The BBC agreed to include the Tenth in its complete cycle of the symphonies, in the form – as it was initially intended – of a detailed illustrated talk. In the event, on 19 December 1960 nearly all of the symphony was performed – the majority of it in Deryck Cooke’s orchestration – by the Philharmonia Orchestra under Berthold Goldschmidt (who had collaborated on the score with Cooke). Only in the second and fourth movements were passages omitted where it seemed that the texture was deficient, amounting to not much more than five minutes of missing music. The performance was introduced by Cooke, with music examples explaining how he had approached the task; he also introduced each movement as it progressed. The critical reaction was positive, especially towards the Finale, which had been played complete. But Mahler’s widow Alma, then living in New York, who had given her blessing to the idea of an illustrated talk, was persuaded – seemingly by Bruno Walter and without having heard any of the music – to ban all further performance. Cooke, who had already been thinking about how he might fill the gaps he had felt constrained to leave, was naturally disconcerted; but he continued to work on the symphony nonetheless. ‘And there’, he wrote in his introduction to the published score, ‘matters might have rested for ever’, had not the emigré German conductor Harold Byrns persuaded Alma to listen to a tape of the broadcast. She was so moved by hearing it that she at once asked for it to be played again; and in May 1963 she wrote to Cooke to say that she gave ‘full permission to go ahead with performances in any part of the world’. Alma died in December 1964, but before her death Schoenberg’s son-in-law Felix Greissle and the Mahler biographer Henry-Louis de La Grange went through her papers and discovered more than 40 pages of sketches for the Tenth which had not been published in 1924. Cooke was able to incorporate some of the material from these sketches in time for the first complete performance, which took place on 13 August 1964 at the BBC Proms, with Berthold Goldschmidt conducting the London Symphony Orchestra. The USA première was given shortly afterwards by the Philadelphia Orchestra under Eugene Ormandy, and they recorded it in November 1965.

it is fascinating to hear how Goldschmidt's initially tentative grasp of this music had strengthened by the 1964 Prom. Fascinating too, to compare that version with the further refinements and changes of the published score upon which Cooke, Goldschmidt, Colin and David Matthews lovingly toiled for another decade.

The value of the Testament set lies in Cooke’s lucid talk.

What it must have been to experience the finale's flute melody for the first time outside a BBC studio! Goldschmidt gives this exquisite moment all the time in the world...Strongly recommended.

The importance of this release cannot be exaggerated: Cooke's original complete performing version has never been published, and the differences will occupy a true Mahlerian's mind for many a long day...The BBC's original mono recordings have been here very finely transferred...I cannot recommend it too highly.

Testament's utterly compelling set, taken from BBC archive recordings, chronicles the first stages of Cooke's elaboration...what makes this set so special is the way it documents what Cooke achieved, and the musical skill with which he did it.