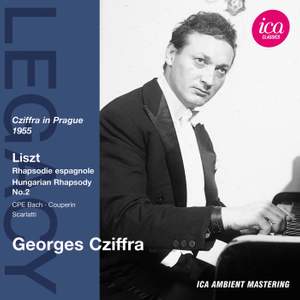 Following his release from prison in 1953, the Ministry of Culture arranged tours of Switzerland and Czechoslovakia. In 1954, he made his ‘first’ recording in Hungary and in 1955 in Prague, the source of this recital. He won the Liszt Prize in the same year. In 1956 he made a successful bid for freedom, arriving in Vienna, and was signed by EMI in France where his subsequent concerts created a furore.

This recital has never been issued before on CD. It is extremely rare having been remastered from a collector’s LP.

The recital contains miniatures – CPE Bach, Scarlatti and Couperin as well as the Liszt warhorses which Cziffra became famous for. Out of the four Scarlatti Sonatas, Cziffra includes three in F, G and A that are new to his discography.

The recital is totally free from eccentricity and represents the pianist at his best.

The two bonus tracks come from a 1959 recital in Turin which show off his dazzling technique. The Bach arr. Liszt: Fantasy & Fugue has never appeared on CD before.