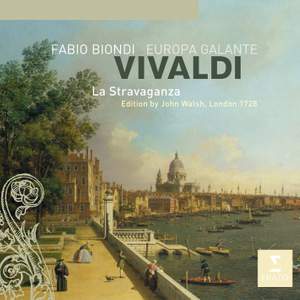 Europa Galante, under its director Fabio Biondi, recently paid Vivaldi a “fabulous tribute” (in the words of BBC Radio 3) with the Virgin Classics recording of the opera Ercole sul Termodonte, reconstructed by Biondi himself. Now they further expand their rich catalogue of Vivaldi’s works with six concertos – five from La Stravaganza and another in F major – published as a set in London in 1728 by John Walsh and a pillar of the composer’s international fame in his lifetime.

No major ensemble today is more closely associated with the music of Vivaldi than Europa Galante under its dynamic violinist director, Fabio Biondi.

Europa Galante’s Virgin Classics catalogue of the Venetian composer’s music embraces concertos, choral music and opera – most recently Biondi’s reconstruction of Ercole sul Termodonte with an all-star cast led by Rolando Villazón, Joyce DiDonato and Diana Damrau, which was awarded a Diapason d’Or in France and, as Disc of the Week on BBC Radio 3’s CD Review, was described as “a dazzling showcase for Vivaldi’s profusion of style”; with its “articulate, colourful cast and dramatic propulsion” it was deemed a “fabulous tribute” to the composer.

This new addition to Europa Galante’s Vivaldi discography comprises six concertos published in London in 1728 by John Walsh, England’s leading music publisher at the time. In the early 18th century Vivaldi enjoyed international celebrity: he took commissions from wealthy foreigners; the scores of his concertos were collected by travellers on the Grand Tour and his works were also published in Amsterdam between 1711 and 1729.

Walsh, who had previously possibly commercialised ‘pirate’ editions of Vivaldi’s music, took five concertos from the twelve in the collection La Stravaganza and added a sixth concerto in F major, RV 291, which does not survive in any other source, so cannot be attributed with absolute certainly to Vivaldi. All the concertos Walsh selected cater to the English taste for the concerto grosso, with more than one soloist.

This CD also includes a further Vivaldi concerto, RV 544 in F major, entitled ‘Il Proteo o sia Il mondo al rovescio’ (Proteus, or the world upside-down), which refers to shape-shifting sea-god Proteus. The score is ingeniously written so that, with an appropriate shift in pitch, the solo violin and cello could readily swap parts.

Biondi's playing is characterised by impressive variety, from the crisp articulation of the outer fast movements to the mellow-toned warmth of the slow ones...While there is plenty of swooping virtuosity on display, in the end it is the slow movements which impress with their consistently haunting quality. Europa Galante provide fine support with a full string sound

This ingenious new recording includes the six of Vivaldi's Op 4 published by Walsh in 1728...and the result is a demonstration of a virtuosity that would suit English tastes. But what clinches this recording is the vivid, earthy playing by Biondi and his (Italian) forces.