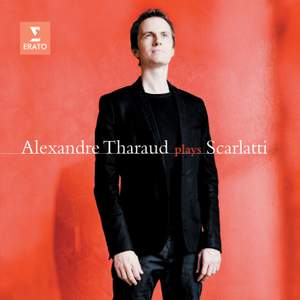 if Tharaud is evidently aware of the stylistic insights afforded by the scholarly diggings of the past few decades, he's unrepentantly pianistic in his approach...Tharaud's is playing with personality,... — BBC Music Magazine, March 2011, 5 out of 5 stars More…

Keyboard Sonata in A Minor, Kk. 3

“I love the extravagance, the sunny glow, the light touch of Scarlatti,” says French pianist Alexandre Tharaud, whose second Virgin Classics release is a collection of the composer’s captivating and adventurous keyboard sonatas. His first release, the Chopin recital Journal intime was described by The Guardian as “altogether breathtakingly beautiful”.

“Listening to Mr. Tharaud's crisply articulated and vividly etched playing, a listener might guess that he is a Baroque specialist who, for some reason, prefers the modern piano to the harpsichord. But … Baroque music is only one of his interests,” wrote the New York Times in 2005.

In typically imaginative fashion, Tharaud combined early Romanticism with the Baroque over the 2009-10 season when he toured a recital programme of works by Chopin – the subject of Virgin Classics release, Journal intime – and selections from Domenico Scarlatti’s canon of 555 keyboard sonatas.

“I love the extravagance, the sunny glow, the light touch of Scarlatti, who shares with Chopin a precise sense for ornamentation, a culture of beauty in sound and an intimate rapport with the audience,” he says.

Tharaud’s previous exploration of the Baroque repertoire has focused on composers such as Couperin and Rameau, whose music is rarely heard on the modern piano. The tradition of Scarlatti on the piano is much more firmly established – Vladimir Horowitz, for instance, would often include his music in recitals – but Tharaud draws inspiration from developments in historically informed performance over the past 30 years. As he told the French magazine Télérama: “I am not sure that authenticity is conferred by a specific instrument, but rather in the way new life is imbued into this music … Baroque musicians have taught us to approach tempi and ornamentation with a sense of freedom, even audacity.”

Scarlatti, born in Naples, spent more than 30 years of his life serving the royal families of Portugal and Spain and died in Madrid. His sonatas are concise, captivating one-movement works in binary form, often adventurous in their use of harmony and modulation, and frequently inhabited by the exotic spirit of Iberian folk music.

“Whether on a broad canvas or on a miniature one, Tharaud’s feel for tonal colouring and his eloquence of expression are a perfect match for this inspiring, kaleidoscopic music.” That praise from the Daily Telegraph could almost apply to works by Scarlatti, but in fact came from a review of Tharaud’s Chopin album, Journal intime. More specific in its frame of reference was The Guardian’s comment on the Chopin disc: “Alexandre Tharaud explores a huge emotional range in his Journal intime, including the most thrilling and propulsive first ballade since Michelangeli's version, with a deeply intense C sharp minor nocturne at the heart. Tharaud lifts the music across the bar-lines with deft rubato, his sound clear, shining and sensuous; altogether breathtakingly beautiful.”

if Tharaud is evidently aware of the stylistic insights afforded by the scholarly diggings of the past few decades, he's unrepentantly pianistic in his approach...Tharaud's is playing with personality, revelling in Scarlatti's playful inventiveness and pungent harmonic daring.

Tharaud commands an impressive range of timbres and articulations with a crisp technique which enables him to express melodic tenderness as tellingly as hard-edged brilliance and clarity.

Tharaud’s choices make for an exhilarating rollercoaster ride between dizzying feats of heady bravura and more gentle moments where introspection and quasi-operatic cantabile playing are required...The playing and musicianship of this young Frenchman are dazzling throughout.

The biggest surprise on this wonderfully exuberant and exhilarating disc comes with the very first notes: the piano tone is rich and full...There's never a dull moment, and Tharaud's range of touch and colour, and his sheer enthusiasm, shine through every jewel-like piece.

The range is extraordinary, from the almost casual, plaintive charm of the K132, with its elegant trills and thoughtful progressions, to the dashing Iberian brilliance of the K420, and the more virtuosic manner of the K72 - three wildly differing explorations of the key of C major, handled with a deft, easy grace and an appropriate dash of wit.

Tharaud's attention to musical detail is, as ever, combined with total spontaneity. The recorded sound adds warmth and this is a wonderfully original reimagining of repertory and instrument.

The fact that Scarlatti used the same two-part structural template for all his sonatas is camouflaged by his vast imaginative range, a fertile mind that Tharaud taps and illuminates absorbingly in this recital...The diversity is captivating and Tharaud is a consummate master of it.

The tipsy downward flourishes which interrupt the singing line of K132 suggest Tharaud improvising dreamily in a tapas bar. Best of all is the tiny two-minute aria which forms K32, a gorgeous moment of calm which hints at what Bach’s keyboard music might have sounded like had he lived in warmer climes. The close-up recording adds to the fun.