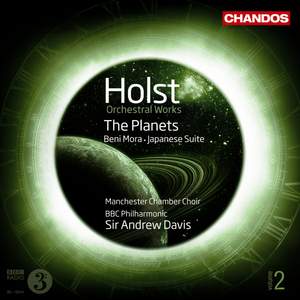 Davis's new performance takes off with 'Saturn': this may not match the sense of weariness Boult conveys, but its inexorable progress is highly effective, and the bells for once sound as if they've... — BBC Music Magazine, April 2011, 3 out of 5 stars More…

III. Finale. In the Streets of the Ouled Naïls

I. Prelude. Song of the Fisherman

III. Dance of the Marionette

IV. Interlude. Song of the Fisherman

V. Dance under the Cherry Tree

VI. Finale. Dance of the Wolves

That The Planets occupies a place at the heart of the English musical repertoire is indisputable, yet much of Holst’s orchestral output is unjustly neglected. Chandos’ series demonstrates that Holst was a composer whose inventiveness and originality was not limited to one work. The series was originally to be conducted by Richard Hickox who sadly passed away in 2009 after completing Volume 1, released to great critical acclaim. Gramophone stated that ‘Richard Hickox’s final project, reviving little-known Holst works, is a triumph’. In this second volume, exclusive Chandos artist Sir Andrew Davis has taken the baton, conducting the BBC Philharmonic in a unique programme: The Planets, Holst’s orchestral tour de force, as well as two comparative rarities in the concert hall, the Japanese Suite and Beni Mora.

Holst wrote all three works between 1909 and 1916, years which span the most important developments in his composing life as he moved away from the Wagner-influenced works of his youth. He had already begun to absorb English folk music, largely through the influences of his close friend Vaughan Williams, and that, together with his study of Sanskrit literature, led him to experiment with new and unique fusions in his music.

The Japanese Suite was originally intended for dancing, and composed at the request of a Japanese dancer, Michio Ito, who supplied Holst with most of the themes in a somewhat unorthodox manner – by whistling them to him. Although the music may seem as characteristic of Holst himself as of anything readily identifiable as Japanese, this work clearly demonstrates a refreshing openness to new influences, which few of his contemporaries shared.

Beni Mora is inspired by ethnic music that Holst heard on a trip to Algeria. Its orientalism may seem very westernised to those familiar with the original music, but it reflects his own experiences of the place – ‘a mix of East and West where one moment he saw an Arab woman leaving a mosque and another moment he saw an advertisement for American Cinematography’. The work was premiered in London in 1912, to the distaste of one critic who exclaimed, ‘We didn’t ask for Biskra girls’. Vaughan Williams later wrote that if the piece had been played in Paris instead of London, Holst would have gained fame a good ten years before The Planets made him a household name. One of the more remarkable musical points about the piece is found in the third movement, which is based on a motif played by a bamboo flutist whom Holst heard on the streets in Algeria. The flutist played the same four notes for hours. This experience is vividly recalled in the movement, yet the mastery of Holst's harmonic texture prevents the motif from becoming tiresome. Beni Mora is regarded as Holst’s first mature orchestral piece.

The immense popularity of The Planets, and the familiarity of the music, means that its originality is often overlooked. But while it is possible to point to a number of contemporary works which clearly had an influence on Holst (Debussy’s Nocturnes, Stravinsky’s The Firebird etc.), the sheer inventiveness and diversity of the music are entirely his own, as he takes us on an unforgettable journey from the violence of ‘Mars’, through the serene calm of ‘Venus’ and the remote and otherworldly ‘Neptune’.

Davis's new performance takes off with 'Saturn': this may not match the sense of weariness Boult conveys, but its inexorable progress is highly effective, and the bells for once sound as if they've been hit by something metallic to alrming effect. 'Uranus, the Magician' is done with an infectious sense of showmanship, while the miraculous shades and textures of 'Neptune' are beautifully caught in the recording.

[Beni Mora] offers opportunities that this team seizes wonderfully, as one gorgeous woodwind solo after another deftly conjures the composer's exotic surroundings...Davis's approach to The Planets goes for no-nonsense directness rather than sonic gross-out...Mercury, the Winged Messenger scintillates, while the strange, remote sounds of Neptune, The Mystic are hauntingly captured.

"Saturn" stands out for its remorseless tread, ominously tangible tubular bells and magnificently built climax...["Uranus"'s] unnervingly bleak coda and the first half of "Neptune" are perceptively handled

'Mars', one of his best performances, is quite fast, rigidly controlled, frighteningly bleak and with a cold sound...Even the terrific climax, with ffff organ chords, has a barren quality to it...'Venus' sounds cool, even melancholy rather than peaceful after 'Mars'. 'Uranus' is splendidly done, with a harsh brass opening and a spooky delicacy in the hopping rhythms.