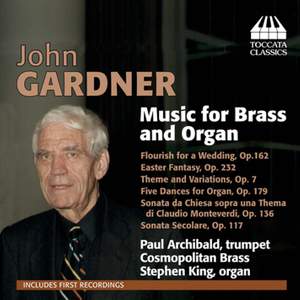 The British composer John Gardner (b. 1917) has been astonishingly prolific, writing 249 opus numbers in his sixty-year career as composer, conductor and teacher.

He was born in Manchester and grew up on the North Devon coast. He began to make a name for himself as a composer as a student at Oxford, but WWII put a stop to his compositional activity until he composed his first symphony while working for the Royal Opera House in 1946–47.

A 30-year teaching post followed at the Royal Academy of Music, followed by positions as Director of Music at Morley College and St Paul’s Girls’ School, for whom he wrote one of his bestknown carols “Tomorrow shall be my dancing day”.

Notoriously modest and self-deprecating, Gardner is, his son Chris says, “a man who does not take himself too seriously, and is not above making an awkward cuss of himself from time to time. But above it all there is a profound musical talent and skills, a consummate professionalism and a musical output of enormous range and distinction”.

Gardner celebrated his 93rd birthday shortly before the release of this CD.

This CD concentrates on the music he has written for brass ensemble and organ, a favoured instrument since his days as an organ scholar at Oxford.