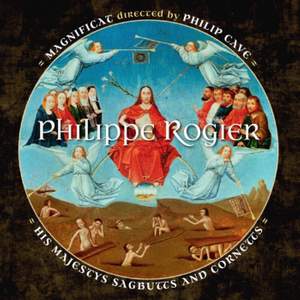 Following the Spanish custom these performances accompany some of these pieces with a glorious jamboree of instruments doubling and decorating the vocal lines; this creates a particularly awesome... — BBC Music Magazine, April 2011, More…

Magnificat are one of the world’s premier vocal ensembles whose recordings have met with huge critical acclaim: Thomas Tallis’ Spem in alium was hailed as “quite the best recording” by Gramophone Magazine and was First Choice in Building A Library on BBC Radio 3's CD Review. In addition their recording of Victoria’s Officium Defunctorum was named Critics’ Choice by Gramophone Magazine and chosen by The Rough Guide as one of its 100 Essential Classical CDs.

This recording, celebrating the 450th anniversary of Rogier’s birth, is a kaleidoscope of sound, with up to 12 choral parts plus instrumental forces including His Majestys Sagbutts and Cornetts, organ and harp.

One of the last great renaissance composers, Rogier’s music showcases the rich, contrapuntal renaissance style, full of lush textures and colour for which he is renowned.

His Majestys Sagbutts and Cornetts is a group of virtuoso wind players who specialise in playing renaissance and baroque music, bringing historically informed performance to life with style and vitality.

Following the Spanish custom these performances accompany some of these pieces with a glorious jamboree of instruments doubling and decorating the vocal lines; this creates a particularly awesome climax in Verbum caro factum est...there's adroitness here too: the word 'Resurrexit' conjures from them a wonderful dancing rhythm.

The grandeur doesn't pall, as Philip Cave varies the texture by employing a continuo group that includes both lute and harp...Rogier is not a top-flight composer but these lively performances are well worth hearing.

[Cave] avoids absolute consistency of tone, colour, attack, phrasing and rhythmic profiling, and allows the music plenty of breathing space, especially at sonorous cadences or where the inner parts move with exceptional beauty or interest. He also brings to this music just enough Venetian warmth and playfulness.

The works on what is Magnificat's second disc of Rogier's music for Linn show how the composer's style, Flemish originally, absorbed ideas from other European choral traditions – including the antiphonal effects of Venetians such as Andrea and Giovanni Gabrieli.