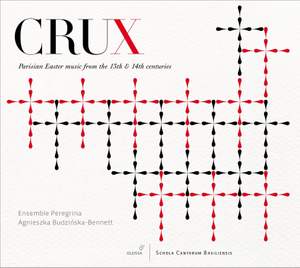 Last spring Glossa started bringing out recordings as part of a new agreement with the long-established Schola Cantorum in Basle and this brand new title from Ensemble Peregrina further demonstrates the vitality of the music-making, teaching and studying at the Swiss music institution. For over a decade the Basle-based Peregrina has been focusing on secular and sacred medieval music, following the completion of the individual ensemble members’ studies at the SCB. The group endeavours to illuminate medieval times with its programmes which pay close attention to textual and musical interrelationships. Led by Agnieszka Budzińska-Bennett, Peregrina is currently made up of artists from Italy, France, Poland and the United States and for its Glossa SCB recording it presents a programme from the High Middle Ages of the 13th and 14th centuries in Europe. With monophonic and polyphonic French repertory from the Notre-Dame School and Aquitanian nova cantica, including a good selection of pieces by poet, preacher and philosopher Philip the Chancellor, the three female singers of Ensemble Peregrina explore an Eastertime programme built around motifs of the Cross, Resurrection and medieval Christians’ approach to mortality. Ensemble Peregrina bring a colourful and dramatic sensibility to important musical remains from over seven centuries past, telling a highly entertaining story with great skill.