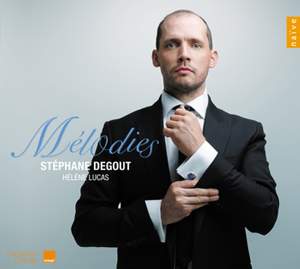 The voice - a natural for Pelléas, one would think - responds rapturously to Debussy and Verlaine's submarine wonders — Gramophone Magazine, April 2011 More…

No. 4. Le martin-pecheur (The Kingfisher)

New Naïve signing baritone Stéphane Degout has already featured as soloist with the internationally renowned choral group Accentus on Brahms' German Requiem and Fauré's Requiem. The programme on his solo debut CD is a selection of mélodies by various French composers, Debussy, Ravel, Duparc, Saint-Saëns, Chabrier, and Reynaldo Hahn. Stéphane Degout first met pianist Hélène Lucas when he entered the Conservatoire National Supérieur de Musique de Lyon in 1995. She soon detected the young singer’s qualities and introduced him to the world of the mélodie and the lieder, and Stéphane gave his first recitals of this repertoire with Hélène Lucas as accompanist. After his acclaimed debut as Papageno at the Festival of Aix-en-Provence, the international operatic world opened its doors to him and kept him away from the lied and the mélodie for a while, but he has now returned to his roots.

Next to the great names of the French mélodie, Fauré, Debussy, and Ravel, Gounod, Bizet, Chabrier and Saint-Saëns appear less often in the singer’s repertoire. Among the latter’s many songs the pieces featured here are splendid examples of subtle orientalism. The less numerous mélodies of Chabrier introduce a French approach to Wagnerism with highly elaborate piano parts and extremely sensual vocal lines. The third of the somewhat neglected mélodistes represented in this programme is Reynaldo Hahn. His vocal works are frequently viewed as relatively lightweight, but the two songs featured here Trois jours de vendanges, and Cimetière de campagne are full of depth and melancholy.

The voice - a natural for Pelléas, one would think - responds rapturously to Debussy and Verlaine's submarine wonders

[there's] no mistaking the quality of his sensual, yet gritty voice, or of his artistry...Degout has an exceptional, if unobtrusive way of projecting a text, and you're conscious – as in the various settings of Baudelaire, Verlaine and Gautier – of listening to great poetry as well as great music...There's wonderfully fluid playing from his accompanist Hélène Lucas, too.