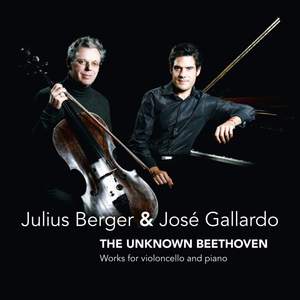 Beethoven: Works for mandolin and piano

‘The Unknown Beethoven’ features a selection of the composer’s chamber music in rarely-recorded arrangements for cello and piano. It includes a version of the early String Trio No. 3, as well as several works originally written for mandolin and piano. The music is performed by two highly regarded soloists, cellist Julius Berger and pianist José Gallardo.

Born in Augsburg in 1954, Julius Berger became one of the youngest professors in Germany, when he was appointed to the Musikhochschule Wuerzburg at the age of 28.

Over the years Julius Berger has devoted a great deal of his time as a performer and recording artist to the rediscovery of Luigi Boccherini’s complete works for cello. He has also recorded a complete edition of the works for cello and piano by Paul Hindemith, as well as the music of Ernst Bloch, Max Bruch, Richard Strauss, Robert Schumann and Edward Elgar. José Gallardo has received numerous national and international awards, such as the first prize at the Westphalian Music Festival in Hamm, Germany in 1990. In 1991, he was given the "Johannes Gutenberg" award by the University of Mainz, Germany, and in 1992, he won the first prize at the international Piano Contest in Cantù in Como, Italy.

After in-depth studies Julius Berger has come to the conclusion that the arrangement of the String Trio Op. 3 of 1794 featured on this all Beethoven CD was created and published with the composer’s knowledge and assent. It is believed to have been made by Kleinheinz. Beethoven travelled to Prague in 1796 where he met Countess Josephine von Clary-Aldringen. She played the mandolin, and Beethoven wrote several works for mandolin and piano for her. Four of these which have been preserved in arrangements by the composer for cello and piano are included on the disc.