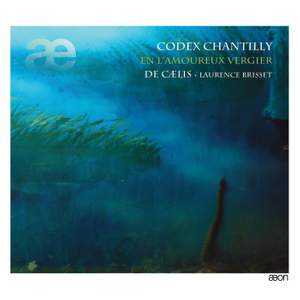 Both text and music are very strange [of Fumeux fume par fumée], with the composition exploring harmonies and deep sonorities rarely encountered in that period. — International Record Review, April 2011

Grimace: A l'arme, A l'arme (Virelai)

An enigmatic manuscript as regards its origin and purpose, and containing musical and poetic enigmas within it—the perfect illustration of Ars Subtilior, the Chantilly Codex, MS. 564 from the library of the Château de Chantilly, is one of the richest collections of French music from the late Middle Ages. Perfectly preserved, it bears witness to the imagination and virtuosity of the musicians who were exploring the limits of musical notation, which had only recently been established. Throughout their works, the composers skilfully scattered riddles, acrostics, plays on words, quotations and mythological, political or amorous allusions. They rivalled in intelligence but also, and above all, in sensitivity, for the intellectual dimension of this art remains at the service of undeniable beauty. Featuring vocal suppleness and gentleness of lines, the De Caelis ensemble maintains an amorous relationship with this repertoire, the clarity and richness of their timbres allowing us to savour the marvels of the polyphonic writing.

Both text and music are very strange [of Fumeux fume par fumée], with the composition exploring harmonies and deep sonorities rarely encountered in that period.