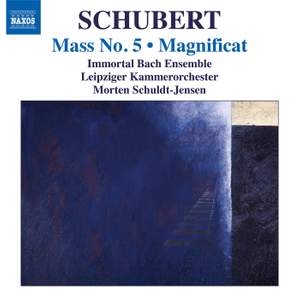 A chorister from the age of eight until his voice broke seven years later, Franz Schubert was well placed to compose sacred music, including several splendid settings of the Mass.

Composed and revised over a seven-year period (1819-26) Schubert’s fifth Mass setting is arguably his most songful and inventive. His integration of the soloists and chorus, mastery of fluid harmonies, and idiomatic treatment of the orchestra’s woodwind section give the Mass in A flat major a symphonic quality which would later inspire Bruckner. Schubert regarded it as the finest of his six Latin Mass settings.

Schubert’s C major setting of selected versicles from the Magnificat is a more Haydnesque piece, recalling the joyfully expressive music of the earlier composer’s famous oratorio The Seasons (available on 8557600-01).