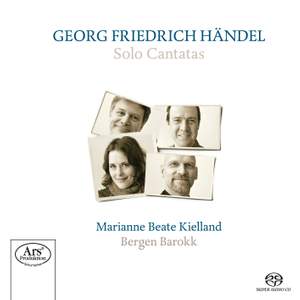 George Frideric Handel primarily composed his cantatas during two periods of his life: whilst he was living in Italy between 1707 and 1709, and in his London years between 1718 and 1728. The greater part of Handel’s cantatas was written during his stay in Italy. After his departure from Italy in 1710, Handel did write more cantatas, but his main work consisted of revising the cantatas already published from this Italian period. This recording is made up of five Italian cantatas and one composed in London (Ho fuggito amore HEV 118). They clearly show the musical development of the composer who perfected this particular song form.

Bergen Barokk was established by Frode Thorsen and Hans Knut Sveen in 1994 and is today one of Norway’s leading early-music ensembles. The group has appeared in concert and in radio broadcasts in Scandinavia, Russia and in the United States. The ensemble recorded for the labels Simax Classics, BIS, Bergen Digital Studio and Toccata Classics.