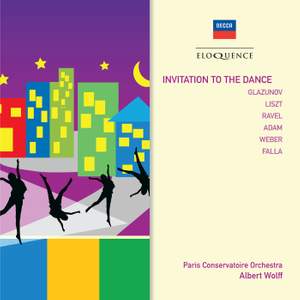 Invitation to the Dance

Dance Of The Neighbours

The recorded legacy of Albert Wolff is one of the most sought-after by collectors. Of Dutch parentage, but born in Paris, Wolff was something of a polymath: pianist, organist, conductor, composer, and had a long career in recording studios beginning in 1920. His first recordings for Decca, starting in the summer of 1951, were a complete Carmen (with Suzanne Juyol), a Manon (with Janine Micheau) as well as several French orchestral suites and individual pieces. By reciprocal arrangement with RCA that Decca had at the time, the abridged version of Giselle was issued on RCA in 1959 and had to wait fourteen years for its appearance on Decca, when it appeared on its ‘Eclipse’ imprint in 1973. This collection brings together balletic works by Glazunov, Ravel, Weber and Falla, together with Liszt’s Second Hungarian Rhapsody.

With such stylish pointing of strings, Rossini's ballet music to William Tell sounds freshly minted, with the distinctive sound of the Paris orchestra adding to the drama of proceedings.