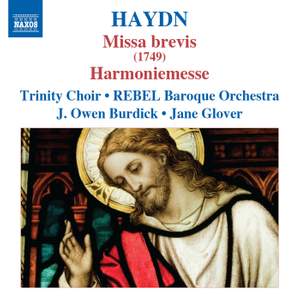 The Missa brevis in F is Haydn’s earliest authenticated Mass and was written shortly before his departure from St Stephen’s in Vienna, where he had been recruited as a choirboy around 1740. Haydn himself, on rediscovering the work almost fifty years later, said he admired it for ‘the melody and a certain youthful fire’.

In contrast, the Harmoniemesse, written for the nameday festivities of Prince Nicolaus II’s wife in 1802, was to be Haydn’s last major composition. Using a full Harmonie (wind band), the work’s expressive intensity belies the end of its composer’s career.