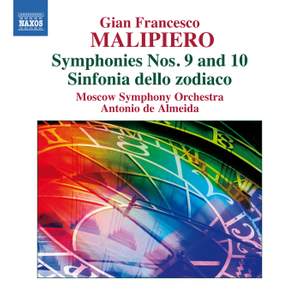 This is the final disc in the series of Gian Francesco Malipiero’s published symphonies, originally issued on Marco Polo. One of the most significant threads in Malipiero’s huge and many-sided output, they strengthen his claim to be regarded as the most important and original Italian composer of his generation. Sinfonia dello zodiaco vividly depicts the ever-changing moods of the four seasons in twelve movements that are analogous to the signs of the zodiac.

The perky capriciousness of his brief Symphony No. 9 is interrupted by an unforgettable but enigmatic outburst by trumpets and percussion marked ‘Ahimè’ (Alas!) in the score. Symphony No. 10, his musical tribute to an admired colleague, Hermann Scherchen, is named after the ancient Greek goddess who cuts short the thread of life.