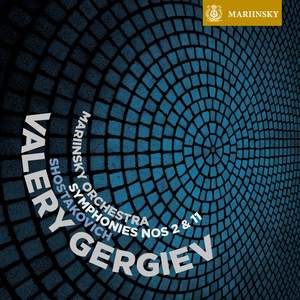 Supported by a vivid SACD recording, Gergiev delivers a compelling account of the Second. His vast experience as an opera conductor pays real dividends in maximising the theatricality of the... — BBC Music Magazine, February 2011, 5 out of 5 stars More…

I. The Palace Square - Adagio

II. The 9th of January - Allegro

The second release in Valery Gergiev’s Shostakovich Symphony cycle features Symphonies Nos 2 & 11. As with the first release in the series, which featured Symphonies Nos 1 & 15, nominated for two Grammy Awards, Gergiev conducts works from opposite ends of Shostakovich’s career. The Second and Eleventh symphonies are both inspired by Russian revolutions. The Eleventh Symphony, subtitled ‘The Year 1905’ marks the bloody revolution of that year. It is an astonishingly atmospheric symphony, of cinematic breadth, especially in second movement which depicts the Bloody Sunday massacre in St Petersburg. Symphony No 2 was written to commemorate the 10th anniversary of the October Revolution. At less than 20 minutes, it is a much shorter work than the Eleventh symphony yet no less dramatic. Although dismissed by the composer later in his career as an experiment, it remains an important step in the development of one of the greatest symphonists and both works receive definitive performances from the Mariinsky Orchestra and Chorus. Gergiev and the Mariinsky tour in the US during October where Gergiev also conducts at the Metropolitan Opera. In November they visit Paris and Berlin. Gergiev also conducts the LSO in London as well as on tour in Japan during November.

The Mariinsky label’s other recent releases include Wagner’s Parsifal, Disc of the Month in BBC Music Magazine.

Supported by a vivid SACD recording, Gergiev delivers a compelling account of the Second. His vast experience as an opera conductor pays real dividends in maximising the theatricality of the musical experience...exhorting the full-throated voices of the Mariinsky Theatre Choir to sing the unashamedly propagandist text with conviction and fervour.

Gergiev, ever the astute interpreter, carves intelligent readings that show just how varied the composer was in his dark, impulsive heart...Not only has [Gergiev] and his attentive orchestra faithfully and artfully scaled one of the composer’s highest peaks with the 11th, they’ve gone some way to invigorating a less popular work with the second.

Gergiev balances the lines meticulously and the accumulative effect is impressive

Gergiev generates a frisson in everything he conducts, but it is only in French and Russian repertoire that his stylistic antennae seem secure...[He] captures [the Eleventh's] brooding majesty in a tense and involving performance, distinguished by the terrifying sound of the St Petersburg winds.

Favouring quick-fire tempi, occasionally too fast for clear articulation, Gergiev avoids getting bogged down in dutiful note-spinning...While the score has more terror and more warmth than Gergiev reveals, admirers will find plenty of compensating flair and drive.

As always, there are moments of greatness, especially in the first movement [of No. 11], where an exceptional control of balance and long range dynamics, combine with a sure dramatic sense, creates a sense of brooding expectation..however, there's a growing lack of focus

Impeccably vivid playing from the Mariinsky orchestra ensures Gergiev is wonderful at depicting both that cinematic pictorialism and the strangeness of the Second Symphony's world; when the chorus intervenes in the Second, triggered by the sound of a factory siren, that is pretty hair-raising, too.