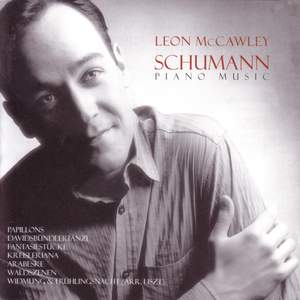 “I ask myself, not for the first time, why we do not hear more of Leon McCawley in London’s concert halls or on CD.” So mused the writer of The Gramophone’s Letter of the Month in April 2003. With this release Avie aimed to satisfy his wish.

Described as “a pianist of rare quality” by The Daily Telegraph, Leon McCawley has emerged as the leading British pianist of his generation. He captured international attention in 1993 when he won both First Prize in the International Beethoven Piano Competition in Vienna and Second Prize in the Leeds International Competition. His singular synthesis of strength and lyricism lends itself exquisitely to music of the Romantic era, making his Schumann recording for Avie apt indeed.

This 2-CD set, comprising over two hours of essential solo piano works by Robert Schumann, is a perfect primer for anyone new to this repertoire as well as a valuable addition to the informed collector’s library.