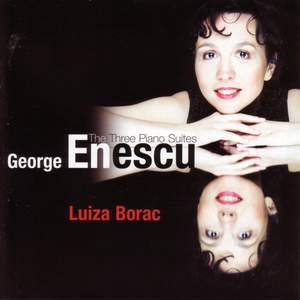 This release introduced the stunning young Romanian pianist Luiza Borac. Presenting a disc of works by her compatriot George Enescu, the combination of Luiza’s artistry and this little-known repertoire is a revelation.

Luiza Borac has won more than a dozen prizes, including top prize at the Oslo International Piano Competition in 2002, and the 1991 International Festival and Competition in Bucharest. In 2001, she received a grant from the German Ministry of Culture to pursue her studies of Enescu’s music. She has been surrounded by Enescu’s sound world all her life, growing up listening to his own recordings and studying with musicians who had direct links to the composer. Her explorations of Enescu’s manuscript scores, documentary films and personal letters have sealed her interpretations with an absolute authority.

Enescu’s Suites are a spellbinding array of Baroque dance forms, Romanian folk idioms and a style one critic has characterised as “French Brahms.” The Suites have never been presented on a single CD, making this release completely unique.