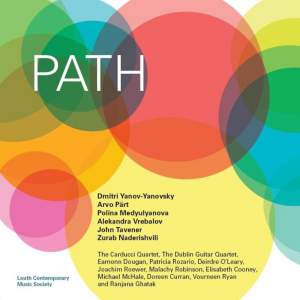 [Face to Face] contains some of [Pärt's] bleakest music ever but, by the end of its brief span, this meditation on St Paul's 'through a glass darkly' epistle is imbued with the major light of... — Gramophone Magazine More…

Tavener: Epistle of Love: I. Into Beauty - II. Yearning for the Lord - III. Epistle of Love - IV. A Communing Morn - V. As a Second Sun - VI. Absolved in the Mirror - VII. Echo

Two world première recordings of pieces by Arvo Pärt - who recently celebrated his 75th birthday - and two more by John Tavener are central to Louth Contemporary Music Society’s second recording, Path, but it’s the beguiling music of four little-known younger composers that may provide the major interest. Dmitri Yanov Yanovsky and Polina Medyulyanova (both from Tashkent in Uzbekistan), the Serbian Aleksandra Vrebalov, and Georgian Zurab Nadarejshvili are the new voices with sounds from different paths.

The CD opens with the beguiling sonorities of Yanov-Yanovsky’s Chang Music IV (1991), where the composer succeeds in transferring the sounds of the Uzbek Chang, a traditional Uzbek instrument, to the string quartet. Pärt's Von Angesicht zu Angesicht (2005) is a contemplation on the First Letter of St. Paul to the Corinthians 'For now we see through a glass, darkly’ sung with great reverence by Eamonn Dougan and Patricia Rozario. The Dublin Guitar Quartet perform Pärt's Summa (1997/1991) for the first time in a sumptuous version for guitar quartet under the guidance of the composer.

Medyulanova’s meditative Ewige Ruhe (2004) allows a moment of calm for the departed to be followed by Vrebalov’s mystical The Spell III (2008) which includes voices from the vocal group Moba. Tavener's deeply moving Epistle of Love (2000) features the haunting voice of Patricia Rozario and lute like piano playing of Michael McHale. Nadareishvili’s reflective String Quartet No1, Mvt III (1987) is performed with great sensitivity by the Carducci quaret and the album closes with the Indian influenced composition Sámaveda (1997) for soprano, flute and tempura, another Tavener premiere.

[Face to Face] contains some of [Pärt's] bleakest music ever but, by the end of its brief span, this meditation on St Paul's 'through a glass darkly' epistle is imbued with the major light of understanding. Tavener's Sámaveda effectively features the tampura and flute to surround Patricia Rozario's voice with intimations of eternal wisdom. Rozario is also featured to impressive effect on Epistle.

World premieres by Arvo Pärt and John Tavener are the main attractions of this anthology, though supporting material by Uzbek, Serbian and Georgian composers is equally engaging, particularly the two movements of Yanovsky's "Chang Music IV", which blend cello glissandi with koto-style pizzicato.

It's not obvious from the bright, abstract packaging what this CD contains. Eight of nine tracks are world premiere recordings. The title relates, obliquely, to Italian composer Luigi Nono's observation: "There are no roads, but we must go on."...Truly a hidden gem.