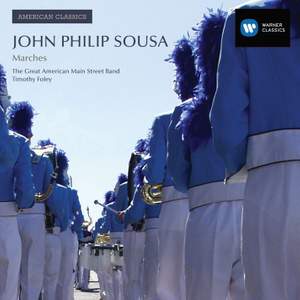 Sousa: The Pathfinder of Panama

Sousa: Who's Who In Navy Blue

Sousa: Sabre and Spurs (March of the American Cavalry)

Sousa: The Fairest of the Fair

Sousa: Here's To Your Health, Sir!

This is the sixth release in EMI's American Classics series, a series devoted to releasing the Company's extensive catalogue of American music of the 19th and 20th centuries.

Born in Washington DC in 1854, John Philip Sousa was enlisted by his father, a trombonist in the marine band, as an apprentice in the US Marine Corps. After years as a military bandmaster he later formed his own band. Although Sousa wrote many songs and other pieces, it is as a composer of Marches that he is known to us today and, indeed, he wrote a great many of them. Some Sousa marches are among the best known in the repertoire – who doesn't know The Stars and Stripes Forever and The Liberty Bell (the signature tune for Monty Python's Flying Circus). Here we have a generous selection of Sousa Marches played by a Great American band.