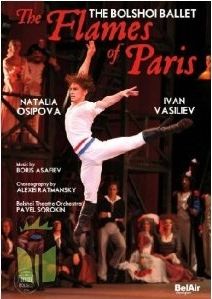 Under the aegis of its now acting artistic director, Alexei Ratmansky, the Bolshoi Theatre Ballet Company, continues its foray into the history of Russian ballet with a revival of The Flames of Paris. Les Flammes de Paris is a two act classical ballet by Boris Asafiev based on songs of the French Revolution, originally choreographed by Vasily Vainonen for the Kirov in 1932 and reconstructed in 2008 by Alexei Ratmansky for the Bolshoi Ballet.

Vasiliev, they say, can almost fly: the Bolshoi’s principal superstar, he’s also been filmed for the Andrew Marr show and is all over youtube. Recent Covent Garden appearances in Don Quichote & Spartacus generated rave reviews. This is his first DVD. The Bolshoi will be performing this ballet in London next August.

“And then there’s Vasiliev and Osipova. A gasping squeal went round the theatre at his first big leap. The jump is high, his legs and feet taut - but it’s his nonchalance that makes it amazing. There’s a lot more where that came from.” The Independent