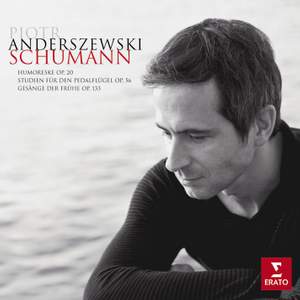 He probes the extremes of Schumann's spiritual world, evoking a terrific spectrum of feeling...And he shows that the Gesänge der Frühe are in no way about mental disintegration: his mellifluous... — Classic FM Magazine, April 2011, 5 out of 5 stars More…

In his last Virgin Classics recital, a varied live programme from New York’s Carnegie Hall, Piotr Anderszewski included Faschingsschwank aus Wien by Schumann. On this new release, he focuses entirely on that quintessential German Romantic, whose 200th anniversary is celebrated in 2010.

“For me, Schumann is the great humanist,” says Piotr Anderszewski. “His purity and honesty touch me profoundly.” This new recital brings together three of the composer’s more rarely performed keyboard works, including the last piano music he completed.

“I fell back in love with Schumann a couple of years ago when I played the Humoreske,” explains Piotr Anderszewski. “For me, Schumann is the great humanist: there is more to his work and his life than music, and his purity and honesty touch me profoundly ... There is even greatness in the failures he experienced as a composer – with the orchestra and in matters of form … He doesn’t achieve the perfection of Chopin, Brahms or Mendelssohn.

“I see him as someone of extreme sensitivity, and also as someone with a bourgeois side to him and a strong sense of family. He was very methodical in his work, meticulous to the point of obsession, with a mad, poetic, idealistic streak that for me is very German. There is an almost religious depth in his work … Even if it can be frenetic and unbalanced, with its rhythmical asymmetry, its digressions, its sudden fortissimos, I still hear reminiscences of Lutheran choirs.

“There is such spontaneity, instability, whimsicality, even weirdness in his music. His writing is angular, as he propels you in one direction and then suddenly takes you the opposite way. His career as a pianist didn't work out, nor did his career as a conductor. He fails in certain compositions – and he even failed when he attempted suicide. There is a vulnerability about him and his music which touches me – and what a fascinating psychological case study he makes – but there is such beauty in what he did achieve.”

For this new recital, Anderszewski turns his attention to some of Schumann’s less frequently performed works. The Humoreske of 1839, far more serious-minded and substantial than its name might suggest, is built in five discrete sections. Mercurial in it shifts of mood, it reflects the composer’s report to his wife Clara that, while working on the piece, he was “laughing and crying, all at once”.

The Gesänge der Frühe date from 1853, the year before the composer’s attempted suicide, and form his last completed work for piano. Terse, introspective and harmonically adventurous they are expressive of the mood before sunrise.

By contrast, the Six Studies in Canon Form are lyrical and unobtrusively contrapuntal. Schumann composed them for the pedal piano which, like an organ, had an extra set of notes played with the feet; an example of the instrument is on display at Schumann’s birthplace in Zwickau. Anderszewski himself has adapted the pieces for the range of the modern piano and for ten fingers rather than two hands and two feet.

In response to Anderszewski’s Carnegie Hall recital, the Daily Telegraph praised “the intellectual power, profound emotional response and keen imagination that his playing conveys … Anderszewski’s remarkable ear for tonal shading and nuance is absorbingly to the fore … [His] command of perspective is paramount. The soft playing is mesmerising, the scope of his interpretation geared to probing deep into the music’s inner expressive tissues … Schumann’s Faschingsschwank aus Wien shows his romantic spirit and his instincts for drama and poetry. This is an outstanding release.”

He probes the extremes of Schumann's spiritual world, evoking a terrific spectrum of feeling...And he shows that the Gesänge der Frühe are in no way about mental disintegration: his mellifluous touch and carefully balanced voicing put them across as slivers of heaven. Anderszewski has the profundity of vision to comprehend these works, the intellect to pace their emotions and the virtuosity to perform them with flair, radiant tone and rapt wonder.