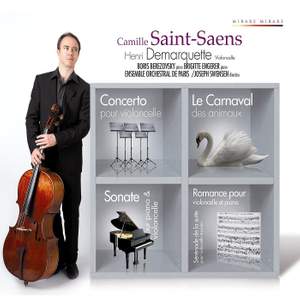 Le carnaval des Animaux was composed in February 1886 while Saint-Saëns was vacationing in a small Austrian village. It was originally scored for a chamber group of flute/piccolo, clarinet (B flat and C), two pianos, glass harmonica, xylophone, two violins, viola, cello and double bass. Saint-Saëns, apparently concerned that the piece was too frivolous and likely to harm his reputation as a serious composer, suppressed performances of it and only allowed one movement, ‘Le cygne’, to be published in his lifetime. Only small private performances were given for close friends like Franz Liszt. Saint-Saëns did, however, include a provision which allowed the suite to be published after his death. It was first performed on 26 February 1922, and it has since become one of his most popular works. It is a favourite of music teachers and young children, along with Prokofiev's Peter and the Wolf and Britten's The Young Person's Guide to the Orchestra.