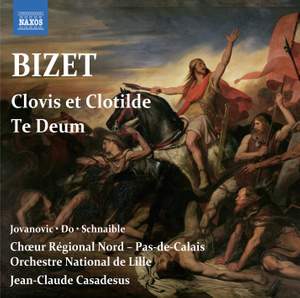 Bizet's cantata, which won him the Prix de Rome in 1857, contains some lovely moments and a few characteristic things...It shows Bizet the orchestrator far beyond the apprentice stage...Jovanovic... — BBC Music Magazine, February 2011, More…

Katherine looks at the recorded legacy of the French composer.

This fascinating disc presents the young Georges Bizet’s first composition after having won the prestigious Prix de Rome, the grandiose Te Deum, which remained unpublished until 1971.

It is coupled with his Prix de Rome cantata Clovis et Clotilde, which recounts the tale of the Frankish King Clovis’s conversion to Christianity by his wife Clotilde.

Both scores are abundantly theatrical, as one would expect from the future composer of Carmen (8660005-07), and are performed by three outstanding young singers and two internationally renowned French ensembles directed by the distinguished conductor Jean-Claude Casadesus.

Bizet's cantata, which won him the Prix de Rome in 1857, contains some lovely moments and a few characteristic things...It shows Bizet the orchestrator far beyond the apprentice stage...Jovanovic float[s] beautiful high notes

Plainly, even in his teens, Bizet had a fully developed talent...There are many moments to cherish, notably Clotilde's prayer, starting on an exquisitely delicate pianissimo. Otherwise Jovanovic is fearless in tackling exposed top notes cleanly and precisely...The Te Deum makes an ideal coupling...in every way a delightful discovery.

[Casadesus] is clearly very fond of [Clovis et Clotilde], conducting it with great panache and making the best possible case for it...In its gawky way I find [the Te Deum] quite fun, especially in a performance as engaging as this one: Casadesus keeps the orchestra light on its feet, the chorus is enthusiastic and Jovanovic and Do contribute solid solos.

Two colourful youthful works, full of ardour, and worth consideration.