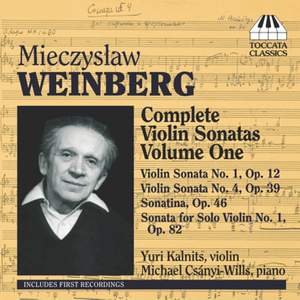 [Kalnits and Csanyi-Wills] prove uber-sensitive to Weinberg's harmonic push-pull, and Kalnit's performance of the Sonata No. 1 for Violin Solo (1964) rolls with the technical punches like a true... — Gramophone Magazine, Awards Issue 2011 More…

Since his death in 1996, the music of Mieczysław Weinberg is being discovered by musicians and listeners all around the world.

He had a remarkable life story. Born in Warsaw in 1919, his early musical experiences were as pianist and ensemble leader at a Jewish theatre where his father was composer and violinist. In 1939, though, his parents and sister were murdered in the German occupation and he fled to Belorussia, finally ending up in Moscow where he lived for the rest of his life.

He had a close connection with Shostakovich; it was originally at Shostakovich’s invitation that he moved to Moscow, and when he was imprisoned in 1953 at the height of Stalin’s anti-Semitic purges it was Shostakovich who got him out.

His vast output includes 26 symphonies, seven operas, seventeen string quartets and much other chamber music, and some 200 songs.

His style has much in common with Shostakovich: fluent contrapuntal skill, an acute sense of drama and a keen feeling for melody, often inflected with Jewish cantilena.

Produced in association with the International Centre for Suppressed Music.

[Kalnits and Csanyi-Wills] prove uber-sensitive to Weinberg's harmonic push-pull, and Kalnit's performance of the Sonata No. 1 for Violin Solo (1964) rolls with the technical punches like a true heavyweight...and I like the way Kalnits resists any temptation to smooth off these structural disjoints, accepting that this material is irreconcilable...Volume 2 soon, please

Kalnits, whose technique and musicality are tested to the limit in this utterly uncompromising Solo Sonata, proves a superb exponent of Weinberg's violin writing. His rich and noble tone and range of colour are matched by an intense sympathy and identification with the composer's undoubtedly complex musical personality.