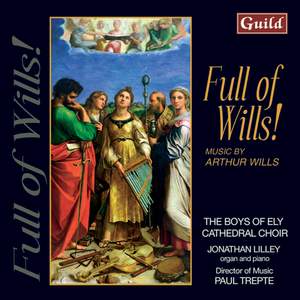 The Boys of Ely Cathedral Choir

Wills, A: The Carol of King Canute (Arr. for treble voices and piano)

Wills, A: Ely' Partsong (Arr. for treble voices and piano)

Wills, A: March: City of Ely

Wills, A: There is no rose

Arthur Wills has enjoyed a forty-one-year association with the music of Ely Cathedral; nine years as Assistant Organist followed by thirty-two as Director of Music. In his 80th birthday year the current Director, Paul Trepte, suggested this recording of some of his music for Boys' Voices, featuring pieces composed from 1960 to 1985. In particular, the inclusion of two pieces - ‘ELY’ - a setting of a poem extolling the fascination of the City and its Cathedral, together with the transcription for organ solo of the March: ‘City of Ely’ sums up his abiding affection for this unique environment.