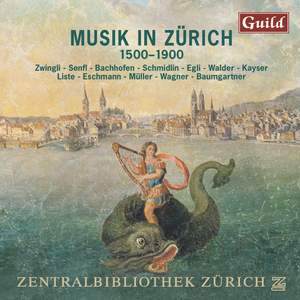 It may have a dull sounding title and a shortage of big name composers and performers but I have no hesitation in recommending it to anyone in search of interesting curiosities… — MusicWeb International, 10th August 2007

Kayser, P: Sonate No. 1 in D Major for Piano, Violin and Two Horns: I. Allegro assai

In the summer of 2007, the Zentralbibliothek Zürich will be displaying music manuscripts, music prints and archival papers and documents in the treasure chamber of the Predigerchor from their extensive music stocks under the title “Zwölf Jahrhunderte Musik in Zürich” (Twelve Centuries of Music in Zurich). Like any other comparable institution, the Zentralbibliothek Zürich reflects the course of cultural, scientific and especially musical life in their collections. Thus, with the help of the exhibits, which are explained in their context, significant events and typical phenomena of local musical life are compiled into a kaleidoscope-like stroll through Zurich’s history of music.

Famous documents, such as the Mozart autograph, which was created in Zurich, or the fair copy of the libretto of Siegrieds Tod (Siegfried’s death) written by Richard Wagner are on display.

Foundation documents and music supplies acknowledge the old Zurich Collegia musica, having characterised the town’s musical life since the 17th century. Various exhibits also illustrate Zurich’s aspiring public music patronage in the 19th century. The Reformation had not only brought public musical life in Zurich to a large extent to a standstill, but also lead to the destruction and disposal of precious medieval music manuscripts. Even so, the pre-reformational period is also represented in the exhibition with outstanding items. Liturgical music manuscripts from the 8th to the 16th century from the library of the Benedictine monastery Rheinau convey an impression of musical practice under the ministration of the churches in Zurich. The Liber Ordinarius of Konrad von Mure is also there, full of references to music – even if without notes – as a script for the liturgy in the Grossmünster of the 13th century a unique testimony for the town of Zurich. With the help of selected examples, the CD lets the listener hear what can be seen in the exhibition. These are representative extracts from other recordings, which have been released as part of the series Musik aus der Zentrabibliothek Zürich - a series mainly released by Guild, which, initiated in 1999, meanwhile comprises 51 CDs. They are almost always first recordings of compositions, which have been created in Zurich since 1500 or have appeared here in print. In the booklet, a detailed discography and a list of references have been included with the notes relating to the work compiled on this CD.