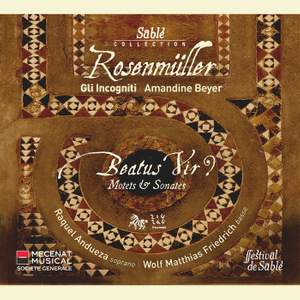 In [No. 7] and the other two sonatas, free from the delicious distraction of the voices, it is possible to appreciate more fully the refined, characterful playing of the ensemble led by its star... — International Record Review, March 2011 More…

Rosenmüller, a prodigiously talented German musician and composer, found himself imprisoned in Leipzig for obscure ‘sex offences’: had his presence there become embarrassing? But he managed to escape to Hamburg, then reached the free and ‘Most Serene’ Republic of Venice, where he eventually taught at the Ospedale della Pietà, long before Vivaldi.

Amandine Beyer and Gli Incogniti have discovered these unpublished vocal pieces in which majestic, quasioperatic sinfonias introduce psalms or other liturgical texts, with voices and instruments answering each other colla parte - as if the composer wanted each musician or singer to transcend his or her own limits. The voice can also sometimes flare up like a flame, an existential interrogation.

‘The “Beatus vir” of the Nisi Dominus is a perfect example of this, with its vocal line which enters so gently that it seems like a tentative question - “Beatus vir?” Is the man blessed? - and is transformed into a whirlwind of sensations, in an almost desperate cry that remains unanswered’ (Amandine Beyer) Amandine Beyer has just been appointed a Professor at the Schola Cantorum in Basel in succession to Chiara Banchini. Gli Incogniti will be giving numerous concerts during the summer of 2010. This project underlines the excentric and freedom of writting of this underestimated german composer, activ in Venice at the XVIIe century and enables to discover completly unknowned vocal pieces. Gli Incogniti made researches on the indications of the musicologist Kerala J. Snyder, found the scores at the Berlin Library and reconstructed the pieces. Professor Holger Eichhorn, specialist of this repertory writes the booklet.

In [No. 7] and the other two sonatas, free from the delicious distraction of the voices, it is possible to appreciate more fully the refined, characterful playing of the ensemble led by its star violinist Amandine Beyer