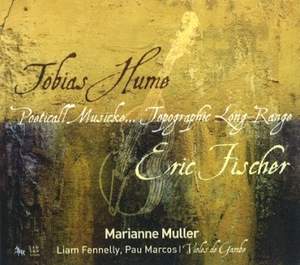 Hume, T: A Question from The first part of ayres for the viole de gambo alone

Hume, T: An Answere from The first part of ayres for the viole de gambo alone

Little is known of Hume’s life. Some have suggested that he was born in 1569 because he was admitted to the London Charterhouse in 1629, a pre-requisite to which was being at least 60 years old, though there is no certainty over this. He had made his living as a professional soldier, probably as a mercenary. He was an officer with the Swedish and Russian armies.

His published music includes pieces for viols (including many solo works for the lyra viol) and songs. They were gathered in two collections, The First Part of Ayres (or Musicall Humors, 1605) and Captain Humes Poeticall Musicke (1607). He was a particular champion of the viol over the then-dominant lute, something which caused John Dowland to publish a rebuttal of Hume's ideas.

Hume was also known as a prankster, as some of his somewhat unusual compositions illustrate. His most notorious piece was "An Invention for Two to Play upone one Viole". Two bows are required and the smaller of the two players is obliged to sit in the lap of the larger player. This work was notated in tablature and is indeed technically possible to play. His instructions to "drum this with the backe of your bow" in another piece, "Harke, harke," constitute the earliest known use of col legno in Western music.

Eric FISCHER has composed more than 200 works, which range from pieces for solo instrument to symphonic form by way of every type of instrumental forces and the most diverse experiences, including chamber music, electronics, vocal works, incidental music for the theatre, improvised music, and pieces for period instruments. His openness to encounters of all kinds has led to other highly unusual artistic exchanges.

Marianne Muller brings to the fore Hume's modernity, particularly in the rhetorical Good Again, where he incorporates left-hand pizzicato and what sounds like chords played col legno.

The Independent on Sunday 17th October 2010