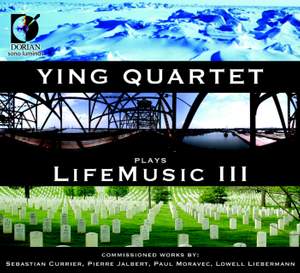 I. Cold Is A Cell

II. Glass Is A Place

III. North Is A Notion

Dorian Sono Luminus is proud to be a part of the Ying Quartet’s commitment to expanding the rich string quartet repertoire with their first release with the label, Ying Quartet Plays LifeMusic III.

The album features new world premiere works by some of the best compositional minds of our day. The Ying Quartet occupies a position of unique prominence in the classical music world, combining brilliantly communicative performances with a fearlessly imaginative view of chamber music in today’s world. Now in its second decade as a quartet, the Quartet has established itself as an ensemble of the highest musical qualifications in its tours across the United States and abroad. Their performances regularly take place in many of the world’s most important concert halls, from Carnegie Hall to the Sydney Opera House. At the same time, the Quartet’s belief that concert music can also be a meaningful part of everyday life has also drawn the foursome to perform in settings as diverse as the workplace, schools, juvenile prisons, and the White House.

The Ying Quartet first came to professional prominence in the early 1990s during their years as resident quartet of Jesup, Iowa, a farm town of 2000 people. Playing before audiences of six to six hundred in homes, schools, churches, and banks, the Quartet had its first opportunities to enable music and creative endeavor to become an integral part of community life.

Now, as quartet-in-residence at the Eastman School of Music, the Ying Quartet teaches in the string department and leads a rigorous, sequentially designed chamber music program. From 2001-2008, the Ying Quartet has also been the Blodgett Artists-in-Residence at Harvard University. The Ying Quartet is the ensemble-in-residence at the Aspen Music Festival and also have performed and taught for several summers at the Bowdoin International Music Festival. They have been featured performers at Tanglewood, Ravinia, Caramoor, San Miguel de Allende, Kneisel Hall, Norfolk, Skaneateles, Amelia Island, Interlochen, and many others. The Quartet’s 2008-2009 season featured performances at Carnegie Hall and McGill University’s Haydn Festival, in addition to appearances with the Billy Childs Sextet.

The Ying Quartet’s ongoing LifeMusic commissioning project, created in response to their commitment to expanding the rich string quartet repertoire, has already achieved an impressive history. Supported by the Institute for American Music, the Yings’ commission both established and emerging composers to create music that reflects contemporary American life. Michael Torke, Kevin Puts, Paquito D’Rivera, Paul Moravec, Lowell Liebermann, Bernard Rands, Pierre Jalbert, Sebastian Currier, and Carter Pann are only some of the renowned composers and musicians who have written for LifeMusic.

Ying Quartet Plays LifeMusic III features new works by Sebastian Currier, Pierre Jalbert, Paul Moravec and Lowell Liebermann. These works deal with a variety of topics, from an elegy for a future that must not happen: New Orleans being submerged under water like Atlantis, not of the mythic past, but one of the too possible future, to a work dedicated “To the Victims of War” and to that of the natural beauty, fragility, and harshness of the icefields of the north.

Produced and recorded by multi-GRAMMY® award nominated and winning producer Judith Sherman, this sonic journey truly achieves stellar heights of sonic integration with the pieces and connection with the listener, just as these amazing works open new doors to the string quartet’s repertoire.