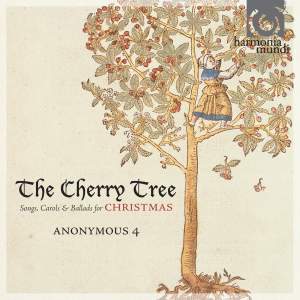 Anonymous 4 could easily serve as an indication of how seamlessly the four womens' voices blend together in these acappella arrangements of 15th-century carols...Though each is showcased on solo... — The Independent, 17th December 2010, More…

anon.: Synge we to this mery cumpane

anon.: Qui creavit celum ("Song of the Nuns of Chester")

anon.: Now may we syngyn

trad.: Star in the East

The Cherry Tree is a collection of medieval English carols and Anglo-American songs that are inspired by the Cherry Tree Carol. After a four year hiatus this is their first album of original material since Gloryland, as ever, scrupulously researched and impeccably performed. The Cherry Tree is named after the miracle ballad of Joseph and Mary, the earliest text of which survives from a Coventry Play from around 1400. The ‘Cherry Tree’ story persisted in many forms, making its way into medieval British carols of the mid-15th century and into British and American traditional ballads. In it, Joseph doubts the divine origin of Mary’s pregnancy only to hear Jesus speak from within Mary’s womb, causing a cherry tree to bend its branches and offer his mother its fruit.

“Anonymous 4’s trademark vocal blend, with its sparing use of vibrato and its careful dynamic gradations within phrases, suits this music beautifully. And three solo ‘ballad-carols,’ along with the Americanised ‘Cherry Tree Carol,’ showed that the singers are as powerful and communicative on their own as they are together.” The New York Times

Anonymous 4 could easily serve as an indication of how seamlessly the four womens' voices blend together in these acappella arrangements of 15th-century carols...Though each is showcased on solo ballads, it's their facility with harmonies...which impresses

For those allergic to Christmas music, here is the antidote. The repertory and performance styles are as unhackneyed as they are varied: here Latin chant from 14th-century Ireland sung with utter purity, there an American Southern folk hymn delivered with a demure and fetching twang.