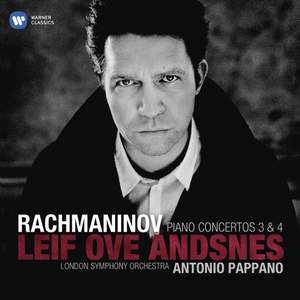 [Andsnes] manages to make the first movement sound more sinister and wayward than most of his rivals, yet he's in his element in etching the filigree and fioriture of the highly-decorated solo... — BBC Music Magazine, December 2010, 4 out of 5 stars More…

Internationally acclaimed pianist Leif Ove Andsnes teams up once again with conductor Antonio Pappano on his new recording of Rachmaninov: Piano Concertos Nos. 3 & 4. They are joined by the London Symphony Orchestra. Andsnes and Pappano first recorded collaboration was the 2004 EMI Classics release of Rachmaninov: Piano Concertos Nos. 1 & 2, with the Berliner Philharmoniker, which received glorious, universal acclaim.

The London Symphony Orchestra, with Vladimir Horowitz, was the first to record Rachmaninov: Piano Concerto No. 3. It was released 70 years ago in 1930.

[Andsnes] manages to make the first movement sound more sinister and wayward than most of his rivals, yet he's in his element in etching the filigree and fioriture of the highly-decorated solo part in the slow movement

Technical challenges are shaken off like rainwater, subtler sections are given the requisite grace and poise, and everything else in between is a joyous blur.

You don't really get indulgences and histrionics from Andsnes - he leaves much of that to conductor Antonio Pappano...What Pappano and Andsnes do so well together is pace both pieces and tell the musical stories...In few other recordings does the opening to the Fourth's Allegro sound so hypnotically tight and magical

If judicious sensuality is indeed on vital quality that manifests itself in [Andsnes's] new recording with the LSO and Pappano, another is the impressive physicality of the performance...He, Pappano and the orchestra breathe together...If Andsnes's playing is arresting for the quantity of relevant detail that he conveys, so too is the orchestra's.

From the start [of the Fourth Concerto], they pace things superbly: the opening piano theme...has a sweeping nobility that is hugely impressive, and the detail Pappano finds in the orchestral writing is no less remarkable. Best of all is the clear-sighted sense of direction that soloist and conductor project throughout this work - making a formidable case for it.

There's no disputing the high standard of Leif Ove Andsnes's pianism in both these concertos, among the most technically demanding in the repertoire – nor the equal brilliance with which Antonio Pappano and the London Symphony Orchestra partner his performances.

The passion burns from within in this incendiary account...The amplitude of his melodies, the rich scoring and the insistent Russian melancholy are most potent when kept under control. The poetic, muscular Andsnes, sensitively and glitteringly accompanied by Pappano and the LSO, does just that.

...together with his lustrous tone and physical power he brings to the Third Concerto a compelling poetic sensibility. He and Pappano are entirely as one in finding the music’s pulse, its fluxes of pace and its blend of grandeur, mellowness and bravura...This is a disc of terrific stature.

emotionally subtle music-making, light and beckoning one minute, steely with tension the next...the orchestra’s lyrical flow is the first thing you notice as the Third Concerto begins. Pappano might not be conducting opera here, but he can’t help bringing out the music’s song or revealing its heart.

just as rippling and brilliant as his 1995 live recording with the Oslo Philharmonic but even more rhapsodic and searching.