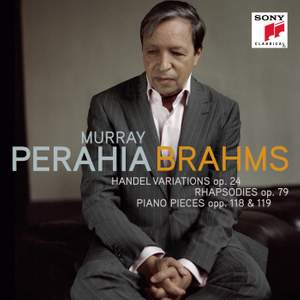 His long experience with Bach's keyboard works gives him a natural point of entry to the Variations on a Theme of Handel, which is taken at quite fast tempos...Yet Perahia never draws attention... — BBC Music Magazine, February 2011, 5 out of 5 stars More…

Twenty years after his last Brahms disc, American pianist Murray Perahia has chosen to revisit this great composer’s works with a new recording featuring the great Handel Variations, Op. 24, a work Perahia considers on a par with Bach’s Goldberg variations. Alongside this are key works from Brahms’ middle and late piano periods. The Two Rhapsodies, Op.79 from his middle period, form the centrepiece of the disk and are deeply Romantic.

The album finishes with the introspective and autumnal Piano Pieces Opp.118 and 119, both from Brahms’ late period.

This is music of a mature composer performed by a pianist at the height of his powers. Murray Perahia has been an exclusive Sony Classical recording artist for almost 40 years, and is one of the most sought-after and cherished pianists of our time. He is the Principal Guest Conductor of the Academy of St. Martin in the Fields, with whom he has toured globally as conductor and pianist. In 2004 he was awarded an honorary KBE by Her Majesty The Queen, in recognition of his outstanding service to music.

Perahia’s previous recordings have garnered a Grammy® Award and several nominations, a Gramophone Award and a BBC Music Magazine Award.

“A prince amongst pianists” Financial Times

His long experience with Bach's keyboard works gives him a natural point of entry to the Variations on a Theme of Handel, which is taken at quite fast tempos...Yet Perahia never draws attention to the technical challenges, and the music seems to flow out of him with complete naturalness.

The middle period Rhapsodies are beautifully rounded. with the composer's bold heroics matched with lyrical, poetic playing. The final ten pieces are intimate and reflective, played with an intense mastery that is wonderful.

Murray Perahia’s Brahms is outstanding in every way. He has the elegance to showcase the baroque inspiration of the Handel Variations, but also the sense of scale and architecture to encompass Brahms’s 30-minute musical journey...This is one of the most rewarding Brahms recitals currently available.

Time and again Brahms's potential for strenuousness and opacity is clarified with a superfine musical intelligence and technique...I doubt whether the concluding and exultant fugure has often been given with a more formidable yet lightly worn articulacy in its entire history...you may well wonder when you last heard a pianist with a more patrician disregard for all forms of bloated excess of exaggeration.

This an astonishing performance, full of superb understanding and technical mastery...His command of the work is complete

one of [Perahia's] finest CDs yet. The set of Handel Variations is both elegant and totally authoritative...Excellent, vivid recording makes this an indispensable example of Perahia's special identification with the composer

The virtuoso challenges of that set are met without ever drawing attention to their brilliance, and the way in which Perahia almost imperceptibly ratchets up the tension is exemplary...The Op 79 Rhapsodies balance power and poetry perfectly, the two sets of late pieces colonise their subtly different worlds with effortless ease. All hugely impressive.

Perahia deals seamlessly with the many subtle shifts of tempo, cementing the parts into a unified piece of light-spirited musicality that makes for a piquant contrast with the ten autumnal "Piano Pieces" from Brahms' late period, bridged here by the flightier "Two Rhapsodies".

[The miniatures] are held aloft by Perahia's unique ability to give each tiny piece close study and analysis, yet then to create a seemingly spontaneous flow of music-making. The B minor adagio (Op 119, No 1) is achingly beautiful, the G minor ballade (Op 118, No 3) fiercely impassioned.

Perahia brings his customary mastery to piano works by Brahms, a composer he is not usually associated with but whose blend of lyricism and rigour suits his gifts perfectly...Throughout, Perahia shapes the phrases in long-breathed arcs while bringing out every detail.