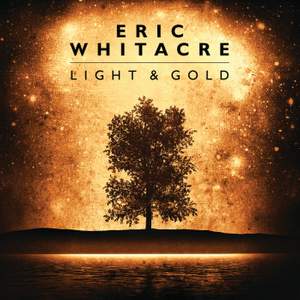 'The Stolen Child'...is the most immediately impressive. Here Whitacre deftly weaves the entreating faerie voices of Yeats's poem with that of the 'human child'...The burgeoning crescendo which... — BBC Music Magazine, Christmas 2010, 5 out of 5 stars More…

Whitacre: A Boy and a Girl

Whitacre: Three Songs Of Faith: I Will Wade Out

Whitacre: Three Songs Of Faith: I Thank You God For Most This Amazing Day

Eric Whitacre (b. 1970), accomplished composer, conductor and lecturer, is one of the most popular and performed composers of his generation. His published works – of which “Sleep,” “Cloudburst,” “Lux Aurumque” and “Water Night” are among the most popular in the modern repertoire – have sold over a million copies worldwide. Paradise Lost: Shadows and Wings, Eric’s cutting-edge musical, has won the ASCAP Harold Arlen award, the prestigious Richard Rodgers Award and 10 Ovation Award nominations. In the US he is greeted with “rock star adulation” (New York Times) and his Virtual Choir projects have given him a worldwide following on YouTube, marking a new digital age for classical music (http://www.youtube.com/watch?v=D7o7BrlbaDs). In 2010 he signed to Decca, and is published by Chester Music.

Light and Gold is a mixture of works from the Whitacre catalogue alongside three World Premiere recordings of new pieces, all of them freshly recorded for the occasion. It's the perfect gateway through which new listeners can experience the allure of Whitacre's music for the first time, while giving existing fans pristine new recordings of some of his most successful pieces, tailored by the composer himself. "This album is the first time that I've ever conducted on record my interpretations of my own pieces," Whitacre explains. "The new pieces haven't been recorded before. Previous recordings of the older works have always been nice, but they've never been exactly what I was hoping they would be. That's the most interesting part for me; it's finally a chance to say it the way I'd like to say it." The pieces on the disc are performed by the British chamber choir, Laudibus, alongside Whitacre’s newly-created vocal group, the Eric Whitacre Singers.

'The Stolen Child'...is the most immediately impressive. Here Whitacre deftly weaves the entreating faerie voices of Yeats's poem with that of the 'human child'...The burgeoning crescendo which opens 'i thank You God' is one among many...examples of the EW Singers' technical and expressive excellence.

it's all spot on: tuning, vocal blend, articulation of text, or shaping and colouring of phrases. Whitacre's texts have a youthful appeal, from Leonardo da Vinci dreaming, to a young couple kissing in the sun. The singers' vibrant performances complement this, not just in their silvery vocal timbre, but in the sense that they truly believe in what they're singing.

Their collective intonation is stunning, and they sing with conviction and enjoyment...[there are] many typical Whitacrian hallmarks: a sonorous haze of piled-up cluster-chords, with deep basses and floating upper parts, punctuated by startlingly "scrunchy" multi- (and oft-unresolved) suspensions of rapturous beauty...this gorgeous disc deserves the widest exposure. Simply glorious!

an engaging and populist, if not overly challenging, programme that presents Whitacre as perhaps the American equivalent of Karl Jenkins.