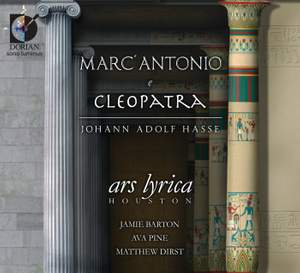 an excellent choice on many levels...Musically, it all sounds very accomplished, almost as if Hasse emerged fully formed as an operatic craftsman...Both singers [Barton and Pine] sound as though... — International Record Review, December 2010 More…

Dorian Sono Luminus invites you to a night at the opera with this 2 CD release of Adolf Hasse’s serenata Marc’Antonio e Cleopatra, performed by the Houston based ensemble Ars Lyrica. This serenata (or “serenade”), follows a love story for the ages of lovers from different worlds, loyal to their countries, but more loyal to each others love.

Founded in 1998 by harpsichordist and conductor Matthew Dirst, ARS LYRICA HOUSTON has begun to make a name for itself in the international early music community. Its distinctive programming favors little-known dramatic and chamber works that merit revival, and its home series “sets the agenda for imaginative period-instrument programming in Houston,” according to the Houston Chronicle. Ars Lyrica’s numerous premières include the first American performance of Handel’s Il Trionfo del Tempo e della Verità and local premières of Jacopo Peri’s Euridice, John Blow’s Venus and Adonis, Handel’s Flavio, and Monteverdi’s 1610 Vespers, among other works. These pioneering efforts have begun to attract international attention: Gramophone recently praised Ars Lyrica’s debut CD (on the Naxos label) for its “exemplary skill and taste,” the ensemble’s musicians for their “impassioned performance” of never-before recorded works by Alessandro Scarlatti.

In 1721 Johann Adolf Hasse traveled to Italy to hone his craft and seek his fortune. His work at the Hamburg Opera and at the Brunswick court assured entrée into Italian musical circles, and he quickly found opportunities in Rome, Venice, and Florence, much as the youthful Handel had done just a few years earlier. The Italians even honored him with the same nickname they had given Handel, “Il Sassone,” despite Hasse’s non-Saxon origins. Settling in Naples, Hasse studied composition first with Nicola Porpora, then Alessandro Scarlatti, and began to write seriously for the stage. By 1730 he produced at least seven operas, eight intermezzi, and three serenate, the most significant of which is Marc’Antonio e Cleopatra.

Hasse’s score makes vivid the complex emotions of his title characters in eight arias, two duets, and some highly expressive recitative; the whole is introduced by a Sinfonia in two movements. Though the work is scored for just strings and continuo, this recording adds various woodwind colors (oboes, recorders, flute, and bassoon), rendering even more colorful Hasse’s imaginative and supple ideas.

This 2 CD set will enchant the early music community, thrill the opera lover, and intrigue all lovers of classical music.

an excellent choice on many levels...Musically, it all sounds very accomplished, almost as if Hasse emerged fully formed as an operatic craftsman...Both singers [Barton and Pine] sound as though they are pushing the limits of their abilities: an exciting and sometimes disquieting experience...overall there's much to enjoy, and full marks for taking on this project in the first place.