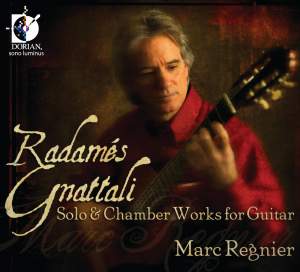 Gnattali: Sonata for Cello and Guitar

Gnattali: Sonatina for Flute and Guitar

Dorian Sono Luminus invites you to take a outh American excursion with this new release of solo and chamber works for guitar by one of the 20th century’s most prominent Brazillian composers, Radamés Gnattali. Performed by master guitarist Marc Regnier, and featuring Natalia Khoma (cello), Tacy Edwards (flute), and Marco Sartor (guitar), these works sizzle though the speakers with their intensity, passion, and virtuosity.

Marc Regnier has appeared as soloist, in chamber groups and with orchestra throughout the United States from Los Angeles to several appearances at New York’s Carnegie Recital Hall. He has performed and given master classes in Canada and South America including invitations to perform and give classes in Europe. He has frequently been featured on National Public Radio and BBC Radio with a recent performance celebrating Chopin’s bicentennial. Marc’s past releases with the Musical Heritage Society and Naxos have garnered critical acclaim with publications such as Fanfare to proclaim “Rarely have the repertoire and the skills of a particular artist been combined as effectively…In summary, Regnier is technically on par with the best in this repertoire and in terms of his hard-to-quantify musicianship, outstanding…a significant recording on all counts.”

And Classical Guitar to say “The rich gliding apoyando and the occasional dramatic pause with molto vibrato could at times be mistaken for the work of the Maestro himself. (Segovia) Regnier has the technical skill needed to carry out his interpretation convincingly.”

Radamés Gnattali (1906-1988) occupies a prominent position in the history of twentieth-century Brazilian music as a figure active in both the popular and classical traditions. Through his work as a conductor, arranger, and performer, he shaped the development of Brazilian popular music, most notably as orchestral director at Rádio Nacional beginning in the late 1930s.

Gnattali’s work raises questions not only about the boundaries between “classical” and “popular” music but about the concept of “Brazilian music” more broadly. He worked in a context that was defined by profound concerns with national identity, or “Brazilianness” (Brasilidade). From the syncopated rhythms of the Sambas, to musical portraits of Brazilian dances as represented by some of their most celebrated exponents, and the retrospective stance is also expressed in Saudade, the tonal colors, rhythmical diversity, and impassioned performances truly display Gnattali’s “Brasilidade”. Recorded at world famous Skywalker Sound, this album is a sonic treat that will be loved by the guitar enthusiasts and chamber music lovers alike.