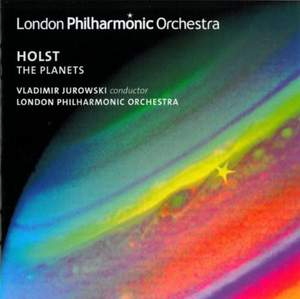 its character and its superb sound, both detailed and well-balanced, are as impressive and involving as ever...the music [is] not only well within the players' grasp but played with polish and... — BBC Music Magazine, December 2010, 3 out of 5 stars More…

Holst’s The Planets requires little introduction. His inspiration for the piece came from hearing live performances of Stravinsky’s The Rite of Spring in 1913, and Schoenberg’s Five Pieces for Orchestra in 1914. These two seminal 20th Century works left a strong impression on Holst.

The London Philharmonic Orchestra has a long association with The Planets. The Orchestra has recorded it under Principal Conductors Adrian Boult (twice in 1953 and 1978, with Boult also giving the first ever performance in 1918) and Sir Georg Solti, then twice in 1970 with Bernard Haitink and film composer Bernard Hermann. Jurowski continues the association with this recording. What can clearly be heard in this interpretation is the influence of the Boult recordings as well as the recordings Holst himself made conducting the London Symphony Orchestra in the 1920s. The tempi are well-chosen, effectively emphasising the drama and creating a performance that resonated strongly with the concert audience, who left feeling that they had been part of a very special musical event.

The recording quality is superb, complimenting the artistic interpretation nicely. It is detailed and spacious - ‘Jupiter’ particularly benefiting from a sense of the ethereal - yet warm and balanced.

its character and its superb sound, both detailed and well-balanced, are as impressive and involving as ever...the music [is] not only well within the players' grasp but played with polish and accuracy all the more astonishing at the fleet speeds favoured by Vladimir Jurowski.

There's real savagery in the way in which he and the London Philharmonic remorselessly build Mars to its shattering climax, French wit in the scherzo-like qualities of Mercury and Uranus, and Stravinskian formality in the restraint of Saturn...Thoroughly recommended.

Brisk tempos and a brilliant, brassy sound distinguish this version of Holst’s best-loved work...hats off to the energy and commitment of the LPO players.