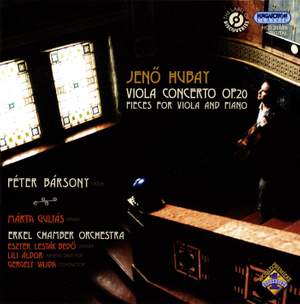 The viola, which has always played a less prominent part in music literature, received only exceptionally attention among 19th-century violinists. Jenõ Hubay (1858–1937) was one of these rare exceptions: he belonged to the foremost violin virtuosos of his time, yet he also liked playing the five tones deeper-sounding larger brother of his own instrument. Performing his Viola Concerto and Pieces for Viola and Piano is Péter Bársony (1975), who graduated from the Budapest Liszt Ferenc Academy of Music. He has won prizes at several competitions, and regularly gives concerts in Hungary and abroad. Also features pianist Márta Gulyás.