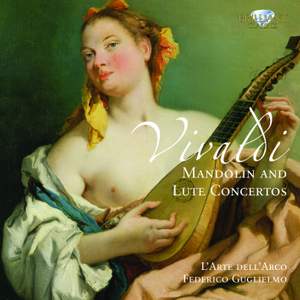 Vivaldi: Concerto for 2 Mandolins, Strings and Continuo in G, R.532

The mandolin was essentially the instrument of amateur musicians in the early to mid 18th century. Vivaldi composed many concertos and trios for the young ladies of the Ospiedale della Pieta – including the famous G major RV532, which must rank as one of his most popular works after the Four Seasons.

The concertos and trios on this CD make a delightful programme, written for the pleasure of gifted students and patrons, full of the hallmarks of Vivaldian style that will not disappoint those who love the famous Four Seasons violin concertos from his Op.8 set. Simple, catchy melodies abound, in both still and often poignant slow movements as well as sparky fast movements.

highly dramatic performances, deriving their from Guglielmo's ability to harness the propulsive nature of Vivaldi's writing while allowing a great deal of rhythmic flexibility and melodic embellishment...Guglielmo's wonderful cadenza linking the first two movements in RV82 is, like his direction throughout, tasteful and inventive.