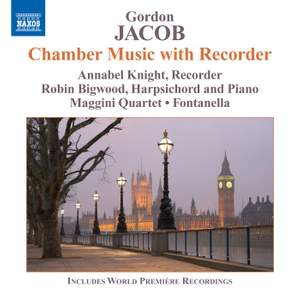 I. Fanfare and March

With some notable exceptions, professional recorder players have largely ignored modern repertoire regarded as being too tonal, melodic or romantic. Not so Annabel Knight, a former student at the Royal College of Music in London, where Gordon Jacob had also taught.

On this disc she joins respected colleagues in presenting Jacob’s music, its sometimes sparse and desolate musical language frequently tempered with tuneful wit and a sense of nostalgia for England’s landscape and heritage.

The result is an album presenting highly enjoyable music of superlative craftsmanship and heartfelt expressivity, including three world première recordings.