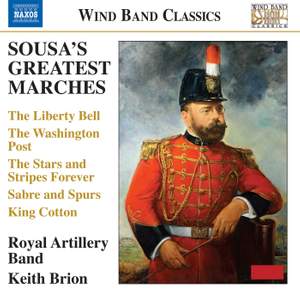 Sousa: Hands Across The Sea

Sousa: Sabre and Spurs (March of the American Cavalry)

Sousa: Hail to the Spirit of Liberty

Sousa: The Fairest of the Fair

Sousa: Riders for the Flag

Sousa: The Glory of the Yankee Navy

Sousa: Nobles of the Mystic Shrine

Sousa: Solid Men to the Front

This 2 CD set presents 34 of John Philip Sousa’s best-loved marches, including The Washington Post which, in the early 1890s, sparked a huge world-wide dance-craze, The Liberty Bell, used as the signature tune for the BBC comedy Monty Python’s Flying Circus, and The Stars and Stripes Forever, the official national march of the United States.

Universally acknowleged as the best of the genre, his marches are notable for their vigorous melodic line and unrelenting driving effect, combined with innovative use of instrumentation and tonal color.