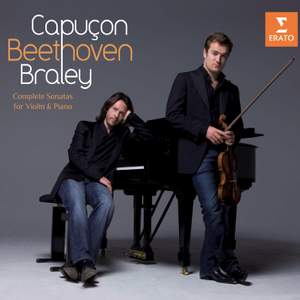 this new cycle is unfailingly musical, and it can hold its own with the best of its predecessors. In particular the French players' performance of the last and greatest sonata, Op. 96...is as... — BBC Music Magazine, November 2010, 5 out of 5 stars More…

Renaud Capuçon and Frank Braley have devoted much of their 2009-10 concert schedule to Beethoven’s complete sonatas for violin and piano. “These sonatas are full of memories for me,” says Capuçon. “The ‘Spring’ Sonata was the first piece of Beethoven I played, when I was ten years old. His music is a rite of passage for every violinist.”

This complete recording of Beethoven’s sonatas for violin and piano grows from a marathon performance project that Renaud Capuçon and Frank Braley launched in their native France in Summer 2009: some 50 concerts around Europe, all devoted to the Beethoven sonatas.

The BBC Music website has observed that: “Capuçon's style, perhaps because of his regular chamber work, is natural, understated and perceptive; the sound of a musician happily relaxed in his skin and not feeling the need to prove any virtuosic credentials.” Indeed, chamber music has always played a central role in his activities, and – beyond his cellist brother Gauthier – his regular partners include pianists Frank Braley and Nicholas Angelich, while his list of colleagues also includes such names as Martha Argerich, Daniel Barenboim, Hélène Grimaud, André Watts, Yefim Bronfman, Myung-Whun Chung, Stephen Kovacevich, Jean-Yves Thibaudet, Vadim Repin, Katia and Marielle Labèque, Yuri Bashmet and Truls Mørk.

“The complete Beethoven is a major project for the next two years,” explained Capuçon to the newspaper Sud-Ouest in summer 2009. “We hadn’t yet performed the Beethoven sonatas in France and we will be taking them on a major European tour. They are a real marathon of three-and-a-half hours of music. We perform the ten sonatas in chronological order so that we can follow the composer’s evolution.

“These sonatas are full of memories for me. The ‘Spring’ Sonata was the first piece of Beethoven I played, when I was ten years old. His music is a rite of passage for every violinist. I wanted to perform the complete cycle before thinking about the Bach sonatas, which are the Everest of the repertoire.

“Beethoven gives you no place to hide in these sonatas. You have to find their spinal column, create a structure – and sing. Without wishing to appear pretentious, I’ve always felt at ease with Beethoven, more than with Schubert or Mozart. But it is for the public to judge.”

According to another French newspaper, La Provence, Capuçon and Braley “won over the public in triumphant fashion” at the festival of La Roque d'Anthéron with interpretations of Beethoven that were “fluid, precise, full of integrity … emphasising both the sweetness and energy of Beethoven … The two instruments established a delicious dialogue.”

Renaud Capuçon’s Virgin Classics recording of the Beethoven Violin Concerto, released in 2009, prompted the BBC Music Magazine to state that he “approaches the Beethoven Concerto very much like the great virtuosos of the past through emphasising the work’s lyrical and expressive qualities”. He and Braley have frequently performed together as a duo and their previous recordings of chamber music for Virgin Classics embrace Schubert (the ‘Trout’ Quintet and the Trios opp 99 & 100) and Ravel (the Piano Trio and Violin Sonata).

this new cycle is unfailingly musical, and it can hold its own with the best of its predecessors. In particular the French players' performance of the last and greatest sonata, Op. 96...is as beautiful as any rendition that can remember...a finely judged cycle that brings a great deal of pleasure.

In the three Op. 30 sonatas (Nos 6-8) this gifted team ensures that the sense of Classicism being pushed towards the outfield becomes even more acute until they nearly send the Kreutzer over the boundary...For a refreshingly spontaneous take on these timeless scores, Capucon and Braley have no serious rivals

Capucon and Braley eschew the bright lights for a place where mellowness, intimacy and relative refinement are more obvious priorities. These are among the smoothest and most beautiful-sounding Beethoven duo-sonata performances to have come my way in recent years.

unfailingly civilised and thoughtful...Capuçon and Braley are scrupulously controlled and delicately coloured: there is such concentration in their playing

these are splendid, genuinely impressive performances. They’re not stamped with the heroism of performers such as a number of those cited above. They’re cut from a far more intimate cloth, preferring incremental, dextrous playing... They exude a tenderness, and a relaxation, that will appeal strongly to those who value chamber intimacies above concertante vigour.

...surely ranks with the greatest names to have recorded these works. This is a meeting of minds, even in the great concerto-like Kreutzer Sonata. They bring wit, fire, deeply felt introspection and an exhilarating freshness to all 10 of these masterpieces.

The intimacy at the heart of Beethoven’s violin sonatas is eloquently enshrined in these performances...The range of expression and increasing interdependence of the instrumental parts are conveyed with true insight.