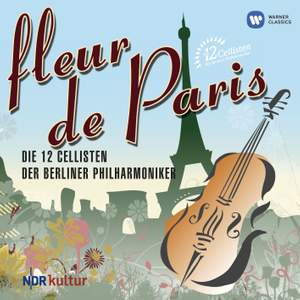 12 Cellists of the Berlin Philharmonic

The long-awaited new disc from the 12 Cellists of the Berliner Philharmoniker takes us on a journey of discovery through the musical landscape of France. In music spanning the best part of a century and covering several genres, the all-cello ensemble sings its way into our hearts, leaving us with “an inimitably French scent of nostalgia.”

“We have long wanted to make a CD purely of French music,” the 12 Cellists write in an introductory note: “France produced many of the greatest cellists, including Pierre Fournier, Maurice Gendron and Paul Tortelier. In fact, the ensemble came into being some 35 years ago, when Jean Français wrote his Aubade especially for the 12 Cellists. When we were looking for music for our new CD, we found lots of pieces that - even if they hadn’t been originally written for our instrumental combination - were wonderfully suited to the sound of 12 cellos.”

The central work on this recording is Poulenc’s most original choral score La figure humaine, composed in 1943 for two unaccompanied choirs of six voices each. Although rarely heard in the original setting, La figure humaine, based on eight poems by Paul Éluard, is perfectly suited to performance by The 12 Cellists. Over a span of nearly 20 minutes, it brings to mind, in turn, plainchant, organ textures, a Baroque dance, bits of popular melodies and resemblances to the work of Debussy and Ravel. The final poem is Liberté, which was dropped over German-occupied France during the War by the RAF and which has been described as a hymn to freedom from German-occupied France.

Other album tracks include arrangements of Fauré’s Pavane, Ravel’s Pavane pour une infante défunte, Debussy’s Clair de lune and Satie’s Gymnopédies Nos. 1 & 2. From the sphere of popular song come Edit Piaf’s signature tune La vie en rose, two Michel Legrand numbers, The summer knows and Une femme est une femme and Fleur de Paris by Henri Bourtayre, made famous by Maurice Chevalier. Sous les ponts de Paris by the prolific Marseille composer Vincent Scotto evokes a stroll along the Seine while Hubert Giraud’s Sous le ciel de Paris is a familiar melody to many of us, even if we don’t know where we know it from.

The 12 Cellists of the Berliner Philharmoniker, an orchestra within an orchestra, was formed in 1974 during the tenure of Herbert von Karajan. The ensemble counts as its godfathers Pablo Casals and Julius Klengel, a performance of whose Hymn for Twelve Cellos was their original raison d'être. In the intervening years, they have augmented their repertoire through commissions and arrangements in a wide variety of styles performed with guest artists on trumpet, clarinet, percussion, harp, double bass and more, drawn from different musical disciplines. Popular performers in concert halls around the world, the 12 Cellists of the Berliner Philharmoniker undertake regular tours both in tandem with the Orchestra and on their own. In the coming months, they will perform in Switzerland, Germany, Italy, and the Netherlands and on a tour of Asia.

This is the 12 Cellists’ fifth recording for EMI Classics. Their previous releases were Angel Voices, music with sacred roots composed between the 16th and 21st centuries, As Time Goes By, mostly arrangements of film music, Round Midnight, a programme of classic Broadway songs, film themes, spirituals and jazz, and South American Getaway, featuring Villa-Lobos’s Bachianas Brasilieras Nos. 1 & 5 and tangos by Astor Piazzolla, among others.