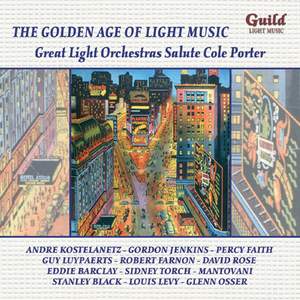 Porter, C: Night And Day (From 'The Gay Divorce')

Porter, C: I concentrate on you (From 'Broadway Melody')

Porter, C: Just one of those Things (From Jubilee')

Porter, C: All through the Night (From 'Anything Goes')

Porter, C: Anything goes, You're the Top (From 'Anything Goes')

Porter, C: Kiss Me Kate' (Selection): Another opening another Show, So in Love, Wunderbar

Porter, C: I Love You (From 'Mexican Hayride')

Porter, C: I've got you under my Skin (From 'Born To Dance')

Porter, C: In the Still of the Night (From 'Rosalie')

Porter, C: Love for Sale (From 'The New Yorkers')

Porter, C: What is this thing called Love? You do something to Me (From 'Wake Up And Dream' and from Fifty Million Frenchmen)

Porter, C: You'd be so nice to come home to (From 'Something To Shout About')

Porter, C: Cole Porter Suite Night And Day: I get a Kick out of You, My Heart belongs to Daddy, In the Still of the Night

Cole Porter was a musical genius who wrote both the words and music for countless songs that achieved great popularity during the middle years of the last century. One could be forgiven for thinking that the lyrics should not be divorced from the music in order to enjoy his creations to the full, but hopefully the glorious arrangements created for the fine orchestras in this collection will quickly dispel any such notions. His trademark was sophistication, and sometimes his ideas were slightly ahead of what was considered acceptable at the time, with tunes such as 'Love For Sale' raising many eyebrows in the 1930s. No longer do we need any hidden meanings in order to appreciate his beautifully crafted melodies.