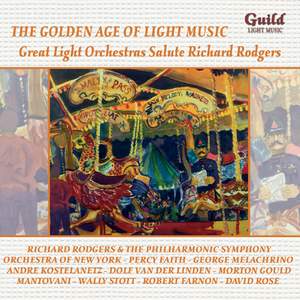 Rodgers, R: The Blue Room (From 'The Girl Friend')

Rodgers, R: Song of the High Seas (From 'Victory At Sea' television series)

Rodgers, R: My Funny Valentine (From 'Babes In Arms')

Rodgers, R: Lady is a Tramp (from Babes in Arms)

Rodgers, R: Falling in love with love (from The Boys from Syracuse)

Rodgers, R: Surrey with the Fringe on Top (From 'Oklahoma!')

Rodgers, R: Beneath the Southern Cross (From 'Victory At Sea')

Rodgers, R: March of the Siamese children (From 'The King And I')

Rodgers, R: It's Easy to remember (From 'Mississippi')

Rodgers, R: State Fair: It Might As Well Be Spring

Rodgers, R: Down by the River (From 'Mississippi')

N / A: Richard Rodgers Suite: Dancing On The Ceiling, Johnny One Note, With A Song In My Heart, The Girl Friend, There’s A Small Hotel, Thou Swell, Little Girl Blue, Mountain

Richard Charles Rodgers became one of America's greatest songwriters. The word 'prolific' might have been invented for him, since his output spanning six decades included forty Broadway musicals, Hollywood films, scores for television and over 900 published songs. His melodies were so finely crafted that it is hardly surprising that all of the top arrangers and orchestras were attracted to his music, and some of the very best recordings from around half a century ago are featured on this CD. With names such as Percy Faith, Mantovani, David Rose, Andre Kostelanetz, Stanley Black, Robert Farnon, Morton Gould and Rodgers himself waving the baton, the quality of this collection speaks for itself.