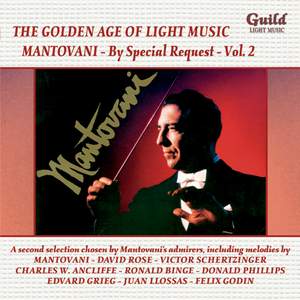 Leoncavallo: Tell me You love Me

Mantovani, A P: In Waltz Time

Reg Casson: The Spirit of the Matador

The strong response to Guild Music's first collection of previously neglected Mantovani recordings (GLCD 5110) made a second visit to the great conductor's archives a 'must' for his fans around the world. Among the treasures now rediscovered are no less than four compositions by Mantovani himself, plus rare items such as two numbers he recorded for Decca's wartime "Music While You Work" series, and a tuneful selection from a long-forgotten show "Song of Norway", featuring the melodies of Edvard Grieg. Special mention should also be made of "Concerto in Jazz" composed by Donald Phillips, an unfairly neglected piece by a very talented writer who is better known for his "Skyscraper Fantasy".